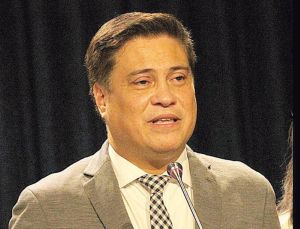 Zubiri had no competition for the Senate presidency after Sen. Cynthia Villar backed out of the race for the top post in the chamber.

Villar on Wednesday said she is “no longer interested” in the position.

Villar said she opted to have Zubiri form a “supermajority” bloc. The senator added that she is not interested in a term-sharing agreement with Zubiri.

“I want a simple life,” she told reporters.

Villar vowed to continue with her advocacies which are agriculture and environment.

The new set of Senate leaders for the 19th Congress was finalized on Wednesday.

The minority bloc is expected to be led by Sen. Aquilino “Koko” Pimentel 3rd with reelected Sen. Ana Theresia “Risa” Hontiveros as member.

Hontiveros will retain the chairmanship of the Committee on Women, Children, Family Relations and Gender Equality.

Zubiri said that he had always wanted to form a supermajority, adding that “a united Senate is a productive one.”

“I would like to thank Ma’am Cynthia Villar from the bottom of my heart for her support, graciousness, and magnanimity in helping me form a supermajority,” he said. “I also thank all my colleagues who believe in me and put their trust and confidence in my ability to lead the Senate in the 19th Congress.”

“Rest assured that all of my experience as majority leader in the 14th, 17th and 18th Congresses will help me greatly in managing the affairs of the Senate. And having been a legislator for as long as I have, I understand deeply the independence, integrity, and dignity of the Senate, and I will always uphold these, as well as the rules and traditions of this hallowed institution,” Zubiri said.