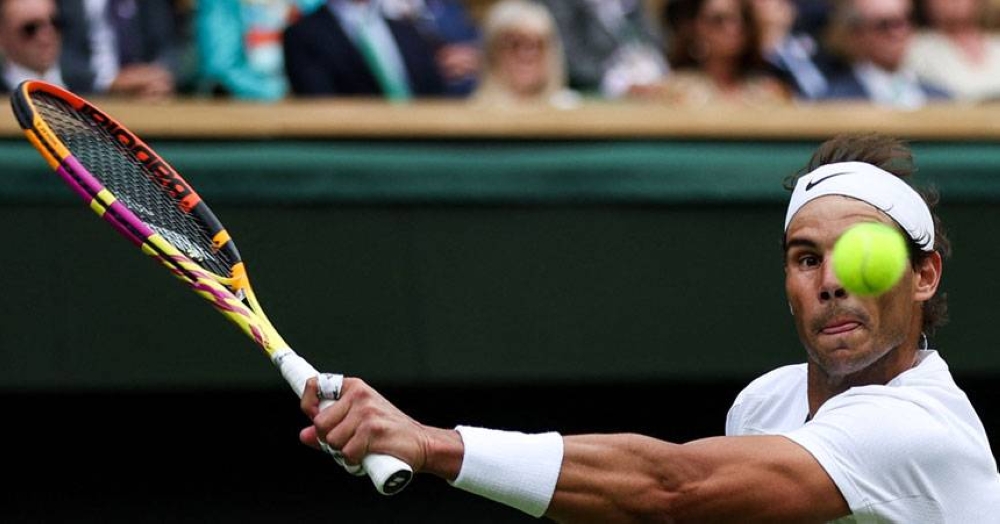 Spain’s Rafael Nadal returns the ball to US player Taylor Fritz during their men’s singles quarterfinal tennis match on the 10th day of the 2022 Wimbledon Championships at The All England Tennis Club in Wimbledon, southwest London, on Wednesday, July 6, 2022 (July 7 in Manila). PHOTO BY ADRIAN DENNIS/AFP

LONDON: Rafael Nadal admits he does not know whether he will be fit to face Nick Kyrgios in Friday's (Saturday in Manila) Wimbledon semifinals after an abdominal injury nearly forced him to quit against Taylor Fritz.

Nadal, the 2008 and 2010 champion, said in his post-match press conference that he was unsure over his ongoing participation in the tournament as he targets the third leg of a rare calendar Grand Slam.

Nadal, who was given pain relief during the match, said he would have tests before deciding whether to play on at the All England Club.

The Spaniard admitted his father and sister had been gesticulating for him to quit his quarterfinal match against Fritz but said he “hated” the idea.

“I fought,” he said. “Proud about the fighting spirit and the way that I managed to be competitive under those conditions.”

Kyrgios, ranked 40th in the world, is a major threat, even to a fully fit Nadal.

The 22-time Grand Slam champion leads 6-3 in their head-to-head meetings but Kyrgios beat the Spaniard on his way to the quarterfinals in 2014 before Nadal gained revenge three years ago.

A pumped-up Nadal raced out of the blocks on Center Court to take a 3-1 lead but then lost five straight games to drop the first set.

The players swapped breaks in the second set but Nadal was not moving freely and when leading 4-3 he took a medical timeout.

But the Spaniard twice held serve comfortably to lead 6-5 and a backhand volley into the open court sealed the second set, to roars from the crowd.

Nadal, 36, was now moving more easily but was broken twice as he lost the third set.

There were five breaks in a topsy-turvy fourth set but Nadal came out on top to level the match.

The fifth set went to a tie-break and Nadal seized control, racing into a 9-3 lead and sealing the win on his second match point.

Nadal, who has already won the Australian Open and the French Open this year, is halfway to the first calendar Grand Slam by a man since Rod Laver in 1969.

He is also bidding to win his 23rd Grand Slam title and equal Serena Williams in second place on the all-time list for most Grand Slam singles titles. Margaret Court is the leader with 24 titles.

Kyrgios's match on Court One contained none of the drama of Nadal's match.

The 27-year-old was broken just once by Garin and hit 35 winners as he reached his first Grand Slam semifinal.

Kyrgios is the first Australian man into the semifinals at Wimbledon since Lleyton Hewitt in 2005.

But he went into the match under a new cloud of controversy after it emerged he faces an Australian court next month to answer an allegation of assault.