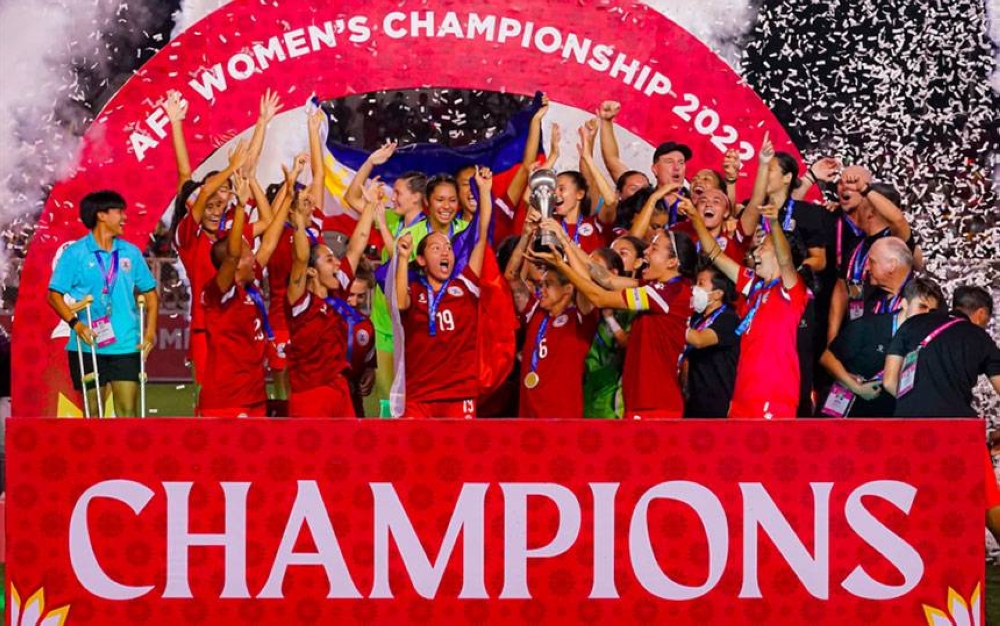 The Philippine Filipinas dominated Thailand in the final, 3-0, to capture their first-ever title in the Asean Football Federation Women’s Championship Sunday night, July 17, 2022, at the Rizal Memorial Stadium. PFF PHOTO

THE Philippine women's national football team, formerly known as the Malditas and now Filipinas, has been on a tear since the beginning of this year.

On January 31, the Filipino lady booters outlasted Chinese Taipei in a penalty shootout, 1-1 (4-3), in the knockout quarterfinals of the 2022 AFC Women's Asian Cup in India.

The pulsating victory keyed the team's qualification to the 2023 FIFA Women's World Cup — the first-ever World Cup qualification in the history of Philippine football in men, women, or youth level.

On May 21, the Filipinas then scored a come-from-behind 2-1 victory over Myanmar to take home a bronze medal in the 31st Southeast Asian (SEA) Games in Vietnam.

It was the first podium finish in the SEA Games of the Philippine women's football team in 37 years or since 1985.

And now, on the rather drizzly evening of July 17, playing in front of the rowdy and electric home crowd at the historic Rizal Memorial Stadium, the Filipino lady booters annihilated Thailand, 3-0, in the finals to seize the Asean Football Federation Women's Championship title.

The victory, witnessed by a tournament-high of 8,257 fans, gave the Philippines its first-ever championship in the Southeast Asian region.

“What the players have achieved, it's been miraculous. It's a whole team effort, the players, the staff. To play 10 games in 28 days across two continents in three or four longboard flights. That's hard in the body. The players were amazing,” said Filipinas head coach Alen Stajcic, whose team avenged its group stage loss to Thailand.

“Filipino football came alive. It's truly a transforming moment. Hopefully, more people fall in love with the sport. Hopefully, the sport can grow and be the number one sport in this country like it is around the rest of the world.”

Jessika Cowart opened the floodgates for the Filipinos as she headed in the ball in the eighth minute off a Tahnai Annis corner kick. Katrina Guillo then doubled the lead for the Philippines as she slid the ball in after a scramble in the 20th.

Energized by the boisterous home crowd, the Filipinas continued to attack in the second half and hammered down the nail in the coffin on a header by Sarina Bolden in the 89th minute.

That goal was Bolden's eighth in the tournament as she emerged as the top scorer of the competition.

The Philippines had been dominant in this tournament, going 4-1 in the group stage by beating Australia, 1-0; Singapore 7-0, Malaysia 4-0, Indonesia, 4-1, before hitting a snag against Thailand, 0-1.

The Philippines then defeated and dethroned Vietnam in the semis, 4-0, before taking down Thailand in the finals.

Meanwhile, Myanmar finished the tournament with a bronze after defeating Vietnam in the battle for third place.