Freeing Myanmar people from the yoke of tyranny

Share
THE military rulers of Myanmar announced early this week the execution of four democracy activists for “acts of terrorism.”

The carrying out of the death sentences opens a new chapter in Myanmar’s continuing saga of brutal repression and has sparked a wave of outrage across the world.

That doesn’t seem to perturb the military junta which has, throughout its decades-long rule, survived broadsides of international condemnation unscathed.

In the sweeping crackdown on dissent that followed, thousands of civilians were arrested, and the United Nations has estimated that more than 1,000 were killed as soldiers used guns, batons and tear gas to disperse street protests.

Hlaing declared himself prime minister and promised to hold elections by 2023. His assurance of a return to normalcy did not impress the Association of Southeast Asian Nations (Asean), which decided to bar him from the summit of the regional bloc’s leaders. 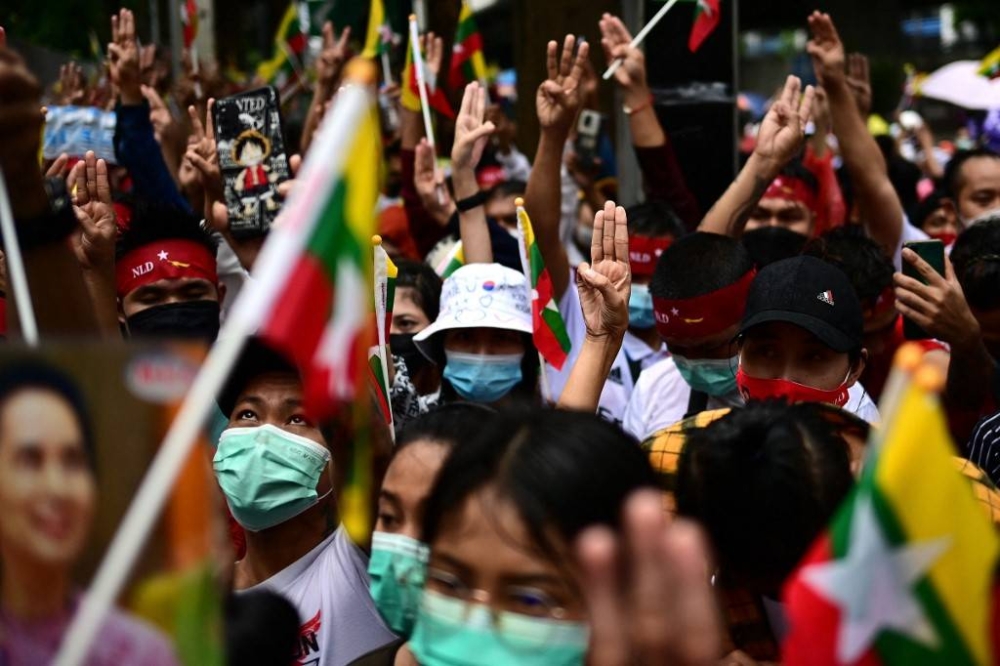 This July 26, 2022 file photo shows protesters making the three-finger salute and holding Myanmar flags during a demonstration against the Myanmar junta’s execution of four prisoners outside the Myanmar Embassy in Bangkok, Thailand. AFP PHOTO

Now Myanmar’s leadership is thumbing its nose once more at critics by announcing the executions, clearly relishing its reputation as the bad boy of the Southeast Asian region.

The execution of the four dissidents may not be the last. Close to 120 death sentences are believed to have been handed down by military-controlled courts since last year’s coup.

UN Secretary-General Antonio Guterres has strongly condemned the executions and called again for the release of all detained prisoners, including Suu Kyi.

The European Union, Australia, Canada, Japan, New Zealand, Norway, South Korea, Britain and the United States jointly denounced the executions as “reprehensible acts of violence that further exemplify the regime’s disregard for human rights and the rule of law.”

For Amnesty International, it was “an enormous setback” and warned that the junta is “not going to stop there.”

Condemnation alone will not stop the rule of repression in Myanmar.

The UN special rapporteur on human rights in Myanmar, Tom Andrews, is urging the Security Council to “pass a strong resolution of not only condemnation but clear strategic action, sanctions, economic sanctions and arms embargo.”

The US State Department has said Washington was crafting its own response to the Myanmar situation, and “all options” were being considered.

The options could also include a ban on the sale of oil and gas supplies to Myanmar.

Sadly, Asean appears to be averse to dealing more assertively with its erring member.

Some Asean states have even recommended “that Asean give space to Myanmar to restore its internal affairs and return to normalcy.”

Following the military coup last year, Asean came up with a “Five-Point Consensus” for restoring peace in Myanmar.

It called for an immediate stop to the violence, constructive dialogue among all parties, assigning a special Asean envoy to facilitate mediation, providing humanitarian aid, and sending a delegation to Myanmar to meet with all parties concerned.

Hlaing’s response to the proposals was inscrutable. He “was not opposed to Asean playing a constructive role, or an Asean delegation visit, or humanitarian assistance,” according to Singapore Prime Minister Lee Hsien Loong, who presented the proposals to the Myanmar strongman.

But Hlaing was lukewarm to the call for an end to the violence, perhaps believing that doing so could be interpreted as a sign of weakness.

The failure to fully agree to the consensus led to the Asean decision to not invite Hlaing to the leaders’ summit. Other than the snub, the group was wary about dealing with Hlaing more forcefully.

This reluctance must end. Asean’s Charter requires its member-states to “strengthen democracy, enhance good governance and the rule of law, and to promote and protect human rights and fundamental freedoms…”

Myanmar’s military regime is clearly in violation of that principle.

The Philippines must take the lead in convincing the Asean leadership to take a more vigorous stance in freeing Myanmar and its people from the yoke of tyranny.