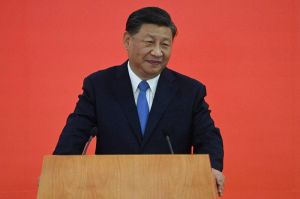 The invitation was personally extended by Chinese State Councilor and Foreign Minister Wang Yi during his recent meeting with Marcos in Malacañang.

“Yes he (Marcos) did,” Press Secretary Trixie Cruz-Angeles told reporters when asked if the President accepted the Chinese government’s invitation.

No date has been set for the visit, Cruz-Angeles said.

During his courtesy call on Marcos, Wang stressed “the cooperation between China and the Philippines and that it transcends any maritime disputes,” Cruz-Angeles said.

The Chinese minister stressed that “the friendship between the two sides has lasted for many years,” she said.

The President, for his part, “seeks to bring the bilateral ties with China to a higher level,” Cruz-Angeles said.

Marcos said on Twitter that Wang extended Xi’s congratulations and support for his administration.

“We also discussed agriculture, infrastructure, energy, and our commitment to maintaining the strong relationship between our peoples in the coming years,” Marcos said.

Wang is on a Southeast Asian swing until July 14, culminating in the G20 Foreign Ministers’ Meeting in Indonesia.

Marcos said he intends to “find ways to work to resolve the conflicts that we have” as he does not want the two countries’ relationship to be just confined to the maritime issues in the West Philippine Sea.

Manila and Beijing have long been locked in a dispute over areas of the South China Sea — almost all of which China insists it has exclusive rights to.

Beijing has rejected a 2016 Hague ruling that its historical claims were without basis.

Former president Rodrigo Duterte fostered warmer ties with the country’s powerful neighbor by setting aside the ruling in exchange for promises of trade and investment, which critics say have not materialized.

During the recent event of the Association for Philippines-China Understanding, Marcos said he will continue Duterte’s “independent foreign policy.”

“This is what we feel is best in the national interest and I feel it is to be advantageous not only to our friends in China but to all our friends around the world,” he has said.

The President also said the Philippines’ alliances with other countries will “keep the stability of our economic recovery” from the Covid -19 pandemic.

Marcos’ father, Ferdinand Sr., visited Beijing in 1975 when he was president on the invitation of Chinese Premier Zhou Enlai. He and then first lady Imelda Marcos had an audience with Chinese Communist Party Chairman Mao Zedong.