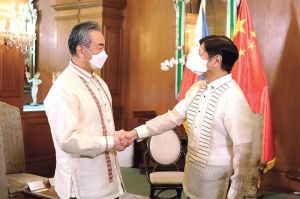 PRESIDENT Ferdinand “Bongbong” Marcos Jr. reaffirmed the country’s appreciation of China’s role as a dependable partner during his meeting with Chinese State Councilor and Foreign Minister Wang Yi in Malacañang on Wednesday.

“We also discussed agriculture, infrastructure, energy, and our commitment to maintaining the strong relationship between our peoples in the coming years,” Marcos said after the meeting.

Wang, who delivered President Xi Jinping’s message of congratulations and support to Marcos, is in Manila for a six-day official visit.

Prior to his visit, Wang said that bilateral relations between China and the Philippines “has turned a new page” following Marcos’ rise to power as the country’s 17th president.

The President said that he hopes his meeting with Wang would pave the way for the Philippines and China to find ways to resolve conflicts, including the territorial dispute in the West Philippine Sea.

“Let’s have cultural exchanges, educational exchanges, even military if that will be useful. Of course, the G2G (government-to-government schemes) has always been there, the private sector joint ventures have also been there. But I think that the more we do with that, the more it will help resolve the issues,” the President said.

“It’s essentially always trying to find ways to improve relationships. And we have many proposals to them in the sense that as I said we would like for us to increase the scope. Huwag lang ‘yung West Philippine Sea ang pinag-uusapan ng China at saka Pilipinas (Let’s not limit the discussion between China and Philippines to the West Philippine Sea). Let’s do other things, too. In that way, it will normalize our relationship,” he added.

Marcos earlier said he would continue the independent foreign policy initiated by former president Rodrigo Duterte, saying it was best for national interest.

“If you’re talking about President Duterte’s policy of engagement with China, that’s really our only option,” Marcos said in a radio interview in January.

After taking office in 2016, Duterte put the disputes on the backburner and tried to nurture cozier relations with China. He disregarded calls to aggressively demand that Beijing comply with a landmark 2016 ruling by a UN-backed arbitration tribunal that invalidated China’s extensive claims in the South China Sea on historical grounds. The tribunal also ruled that China’s massive land reclamations and actions against Filipino fishermen at a disputed shoal violated the 1982 UN Convention on the Law of the Sea.

China refused to take part in the arbitration, which was initiated by Duterte’s predecessor, the late Benigno Aquino 3rd. Beijing continues to defy the ruling, which was welcomed by the US and other Western governments that have challenged China’s flexing of muscles.

Duterte’s stance was criticized by nationalists and activists as a “sellout,” which they said squandered the Philippines’ arbitration victory.

2022-07-07
AtinitoAdmin
Share
Previous New appointees, including 3 Duterte execs, named
Next The bestselling books in Canada for the week ending July 6, 2022