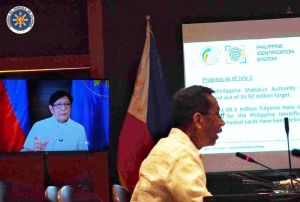 President Ferdinand Romualdez Marcos Jr. met with National Economic and Development Authority Director-General Arsenio Balisacan via teleconference. The President wanted a faster turn-around in the printing and delivery of National IDs to the Filipino people. (Photo credit to the Office of the President)

Marcos said in a Facebook post on Thursday he ordered the National Economic and Development Authority to speed up the printing and distribution of Philippine Identification (PhilID) cards during his meeting with Socioeconomic Secretary Arsenio Balisacan in Malacañang on Wednesday.

The President said the plan is to print more than 50 million IDs so that can be used by early next year.

Balisacan earlier said the Marcos administration is targeting to issue most of the national IDs by the end of the year.

“Hopefully, we can get most of these IDs either in physical form or in electronic form already available before the end of the year, and that’s the instruction of the President,” he said.

Last December, the Philippine Statistics Authority (PSA) reported that over 50 million Filipinos have registered for the PhilID, reaching its benchmark goal for 2021.

But only 14.3 million of the IDs have been delivered nationwide as of early June, according to the PSA.

In a previous press briefing, Marcos said he finds the level of issuance as “way below” target.

At the onset of the Covid-19 pandemic in 2020, then president Rodrigo Duterte ordered the fast-tracking of the rollout of the PhilID system, which was passed into law in 2018.

The PSA has tapped its field offices to assist in delivering PhilIDs to registrants in remote areas.

Davao City First District Rep. Paolo Duterte is also calling on the Bangko Sentral ng Pilipinas (BSP) and the PSA to find ways to speed up the implementation of the national ID system to further reduce red tape and hasten the provision of essential services and financial aid to low-income families.

The e-governance law, which was re-filed in the upcoming 19th Congress and intends to shift all government transactions online, would be strengthened by the national ID system, Congressman Duterte said.

The ID will help eliminate fake beneficiaries from social support programs, enabling the government to single out individuals who require financial aid during times of crisis.

He noted that his father, former president Duterte, had authorized significant fund releases to speed up the implementation of Philsys.

According to a 2021 report by the Commission of Audit on the BSP, the national bank and its contractor who were in charge of delivering the ID cards were unable to reach production targets, which resulted in delays in the project.

“Accelerating the implementation of the national ID system will make the delivery of financial assistance swift and efficient. Aside from that, a well-maintained national ID system will help the government clean up its database of beneficiaries of social protection programs, such as the 4Ps (Pantawid Pamilyang Pilipino Program),” Congressman Duterte said.

“Even those who dupe the system by getting senior citizen ID cards even though they are not yet qualified to avail of the benefits for seniors will be weeded out,” he added.

Representative Duterte issued a statement on Thursday in response to complaints about the delays in the production and distribution of the Philsys cards, with many waiting more than six months to have their IDs delivered. — Moises Cruz