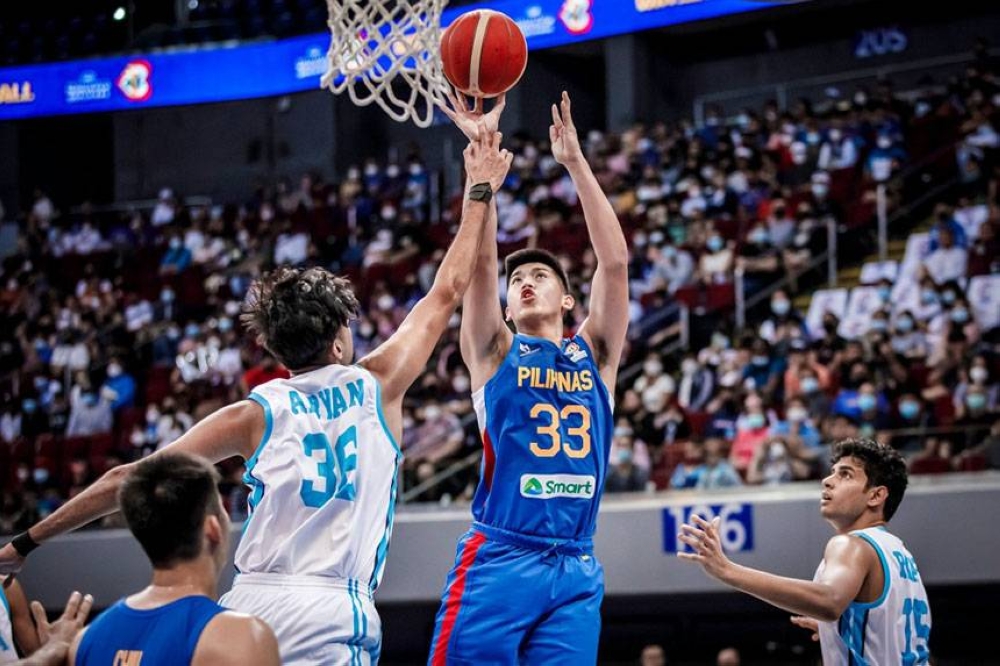 TIME TO SHINE Carl Tamayo (33) is expected to see a lot of quality minutes for Gilas Pilipinas in the absence of injured players Dwight Ramos and Angelo Kouame in the FIBA Asia Cup in Jakarta, Indonesia today, July 13, 2022. PHOTO FROM FIBA.BASKETBALL

PLAYING minus injured players Dwight Ramos and Angelo Kouame, Gilas Pilipinas is hoping that returning player Ray Parks and center Poy Erram can cover up the spots vacated by the two mainstays as the Philippine men's basketball team starts its campaign in the FIBA Asia Cup.

The Filipinos will take on their crack Lebanese counterpart at 9 p.m. at the Jakarta Istorya Senayan.

Ramos begged off from playing due to an injured shin, while Kouame, the team's naturalized player, is still recovering from a sprain and partial ACL tear.

The 6-foot-4 Ramos has been one of the national team's consistent performers over the past year when the team was still being handled by Tab Baldwin. In last year's FIBA Asia Cup Qualifying Tournament, he averaged 13.8 points and 6.2 rebounds per game.

His numbers even got better in the World Cup Asian Qualifiers as he averaged 15.5 points, seven rebounds and 2.8 assists in the four games Gilas Pilipinas has played.

Kouame, on the other hand, provided the inside presence for the team, but without him patrolling the middle, the Philippines was forced to bring in PBA player JP Erram from TNT to help out young 6-foot-8 center Geo Chiu in manning the front court.

Erram and head coach Chot Reyes caught a flight to Jakarta late Sunday night right after they led the Tropang Giga to a 106-92 demolition of Barangay Ginebra Gin Kings.

Parks, who previously played for the national team as part of the Gilas Cadets squad, is returning to the program.

Parks last played for TNT in the first ever bubble tournament of the PBA two years ago and led the team to a finals stint. However, he left the squad last year due to a conflict with the team and brought his act to the Japan B.League.

The Filipinos will be going up against a Lebanese team that has its own next generation of stars led by guard Waek Arakji, a dead shot, who's been hitting 55.6-percent from beyond the arc on his way to averaging 19 points and 3.3 assists per game in the Asian Qualifiers.

The other players to watch in the Lebanese team are 6-foot-9 veteran center Ali Haidar and 6-foot-4 guard Sergio El Darwich.

Haidar is one of the remnants of the 2015 squad that competed in the 2015 FIBA Asia Championship.

In the recent FIBA World Cup Qualifiers, he averaged 11.7 points and 6.5 rebounds per game, slightly better than his average in last year's FIBA Asia Cup Qualifiers.