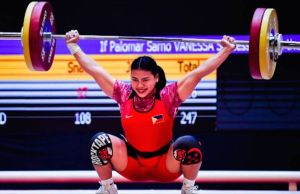 The 18-year-old Sarno notched her first gold when she raised 100 kg in her third attempt in snatch.

The closest to Sarno's snatch performance was South Korean Kim Hyemin's 93 kg in her second try.

Sarno, a gold medalist in both the 2020 Asian Weightlifting Championships and the 2021 Southeast Asian Games, then continued her domination in the clean and jerk, as she raised 130 kg in her third attempt to take her second gold medal.

Indonesian Anggi Restu was second to Sarno in the clean and jerk department with her 120-kg lift.

For totalling a lift of 230 kg, Sarno topped the class for her third gold.

Restu finished a distant second to Sarno with her 212 kg total as Kim completed the podium finishers with her 211.