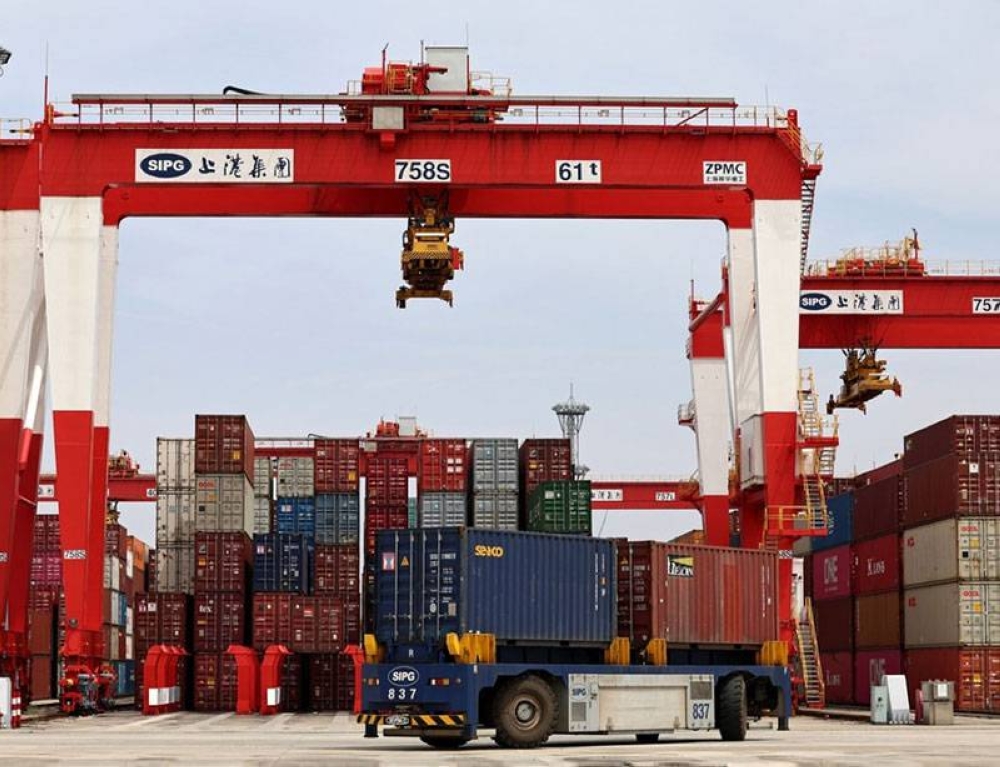 SUITABLE TO BE SHIPPED This April 27, 2022 file photo shows a container truck at the dock of Yangshan Port in Shanghai. XINHUA PHOTO

HONG KONG: Most markets rose on Tuesday on growing speculation that United States President Joe Biden is about to roll back some of the tariffs imposed by his predecessor Donald Trump on Chinese goods as he looks for ways to rein in inflation, though sentiment remains at a premium owing to fears of a recession.

The mood on trading floors has become increasingly gloomy in recent months as observers warn that sharp interest rate hikes aimed at curbing price rises could cause a contraction, compounding uncertainty caused by Russia’s war against Ukraine.

Still, equities were jumping on talk that the White House is about to remove duties on some of the hundreds of billions of dollars worth of imports from China, with reports saying an announcement could come this week.

With some of the tariffs due to expire soon, officials in Washington have been discussing the measures with an eye on inflation, which is sitting at four-decade highs.

And in a sign that something could be on the cards, China’s state-run Xinhua News Agency reported that US Treasury Secretary Janet Yellen and Chinese Vice Premier Liu He had held discussions.

“The two sides agree that as the world economy is facing severe challenges, it is of great significance to strengthen macro-policy communication and coordination between China and the United States,” it said.

“And jointly maintaining the stability of the global industrial and supply chains is in the interests of both countries and the whole world,” it added.

Hong Kong, Tokyo, Sydney, Seoul, Taipei, Mumbai, Wellington, Manila and Jakarta all closed in the green. However, Shanghai gave up early gains and ended marginally down, and Singapore also slid.

London dipped, but Paris and Frankfurt were up in early trade.

US markets were closed on Monday for their July 4th Independence Day holiday.

“Given that inflation remains the White House public enemy No. 1, [investors are] leaning toward a gradual rollback of some China tariffs as it would reduce end costs to US consumers,” SPI Asset Management’s Stephen Innes said.

But some commentators said that while removing some tariffs would be widely welcomed, they were unlikely to have a long-lasting effect on inflation.

“Markets are likely to react positively on a knee-jerk, because at this point, we are hungry for any sign of positive news,” Charu Chanana of Saxo Capital Markets said. “But we don’t see the move impacting the global growth and inflation dynamics in a significant way.”

Oil prices were mixed as traders assess the market with demand outstripping supplies as the war in Ukraine rages with no end in sight, while investors are keeping tabs on China as it sees fresh Covid-19 outbreaks that have led to some cities being put under lockdown.

Monthslong flare-ups in top finance hub Shanghai and the capital Beijing earlier in the year saw millions of people ordered to stay home, sending shock waves through the world’s No. 2 economy and battering supply chains.

“A demand recovery in China could potentially offset weakness in developed economies as central banks tighten monetary policy,” he added.