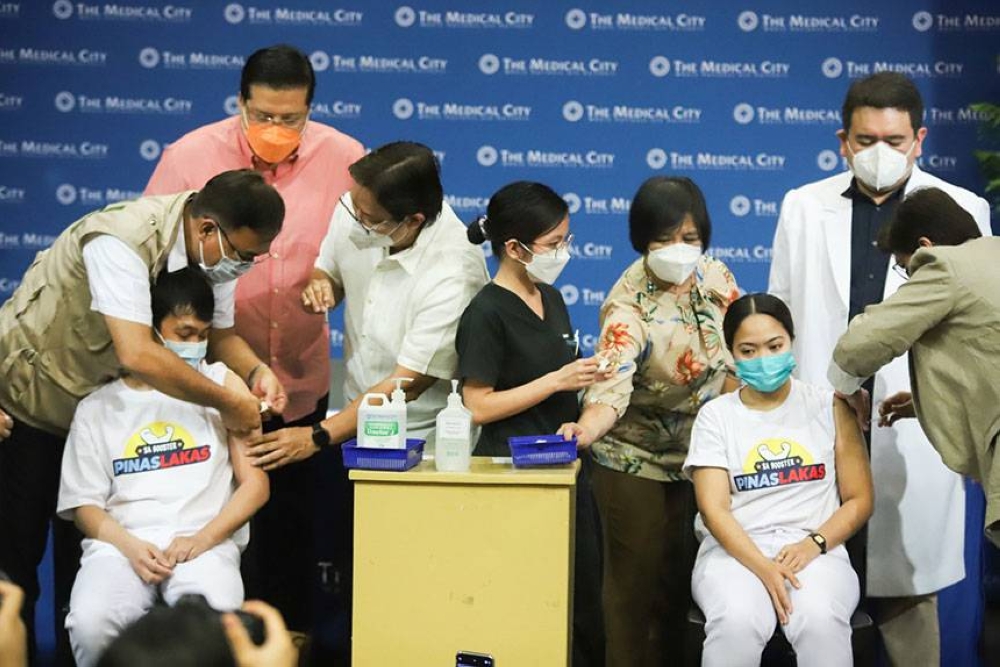 The 23 million make up about a third of the 71 million individuals who have been fully inoculated.

To reach the target, 397,000 people have to be jabbed every day until October 3.

This week, however, the Department of Health (DoH) announced it has fallen short of the daily immunization target, and must now administer 443,892 doses a day if it is to hit the 23-million mark on time.

Not making the deadline will be a big disappointment for the President, who considers stepping up the vaccination rate as a prerequisite before the economy can recover at a faster rate.

In fact, the President had his second booster dose last Wednesday at a vaccination site to drive home his message that every eligible Filipino must get boosted.

It is not the first time the DoH has had to “recalibrate” its vaccination target.

Last year, it only managed to provide primary doses to 49 million individuals, and was below target by 5 million.

That initial hiccup may be understandable. The country was still trying to stabilize its vaccine stockpile, and logistical and distribution problems slowed delivery. Typhoon “Odette” also disrupted vaccination operations.

The Health department had to scale down its expectations. The original plan was to vaccinate 77 million — 70 percent of the population — by the end of 2021 to achieve an acceptable level of protection against Covid-19.

It launched National Vaccination Day, a four-day period during which scores of jab sites were set up to make it more convenient for the people to get their shots.

About 10.25 million had their shots during National Vaccination Day; the DoH was expecting at least 15 million. The national target was lowered from 77 million to 54 million.

The department puts the actual fully vaccinated figure at 71.8 million. That’s not encouraging at all, especially since the emphasis has shifted to administering booster shots to revive the waning immunity provided by primary doses.

A big part of the problem is that the DoH is too slow to adjust its Covid response policies to developments on the ground. It was reluctant to let go of lockdowns even when they had lost their effectiveness in containing the spread of the virus. Health officials took their time vetting vaccine brands that had already passed more stringent screening in other countries.

And it dallied in determining if people other than medical frontliners, senior citizens and individuals with comorbidities are eligible for booster shots. That moment of indecision has led to confusion and, no doubt, further reinforced vaccine hesitancy.

Vaccine hesitancy will, in fact, become a serious challenge as millions of schoolchildren return to their classrooms next week. The DoH has announced it will set up vaccination sites in schools, although vaccination will not be mandatory, and the schoolchildren need parental certification before getting jabbed.

Even if in-school vaccination is carried out, it will be a major operation, in terms of logistics and manpower. The DoH started jabbing children ages 5 to 11 and adolescents 12 to 17 years old only last February. The rollout was delayed because of shipment problems and opposition by some parents to have their kids immunized.

Because of the delay, only 736,000 5- to 11-year-olds and 9.5 million adolescents have been fully inoculated. The DoH will have a lot of catching up to do.

Rajendra Yadav, the acting World Health Organization representative to the Philippines, highlighted the need for a successful mass vaccination program. “The more people and children are vaccinated, the more protected we all are against Covid-19,” Yadav said. “Together, we can help prevent new variants from emerging. We can slow down Covid-19 in its tracks.”

That should be the mantra that the Health department must embrace. Enough with the excuses. It’s time to come up with positive results.

Consensus emerges in Congress for postponement of barangay and SK polls