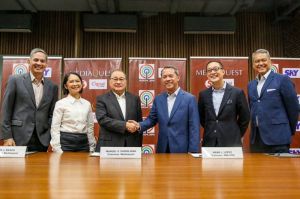 THE buying of erstwhile media giant ABS-CBN into its competitor TV5 Network will not diminish the competition between them, a local think tank, Infrawatch PH, believes.

The flagship of the Lopezes’ media conglomerate can raise its share to as much as 49.92 percent after eight years, if it wants to.

In return, Cignal Cable, an affiliate of Pangilinan-owned pay television provider Cignal TV, will acquire 38.88 percent of SkyCable from ABS-CBN, Lopez Inc. and Sky Vision Corp. for P2.465 billion, with an option to bump it up to P4.388 billion after eight years.

The deals between the two media entities totaled around P11 billion.

In a statement, Infrawatch PH convenor Terry Ridon said that the partnership of ABS-CBN and TV5 is a testament to the enduring quality of content produced by the “Kapamilya” network, which has remained cutting edge despite its shutdown in 2020.

Ridon said it was also a leap forward for TV5, since it can now compete with the country’s broadcasting leader, GMA Network, in terms of advertising revenue, talent and programming.

He said the deal was not a “franchise issue,” because there was no transfer of controlling stakes requiring congressional approval.

Ridon believes that the adversaries of ABS-CBN “at all levels of government” will “sabotage” the partnership.

Some congressmen are already pushing for an inquiry into the deal.

But Ridon said Congress “should focus on more important public concerns, such as economic recovery and social programs, instead of wasting time inquiring on content sharing deals between media entities.”

He said there was no basis for the PhCC to cancel the deal for being anti-competitive, since it does not involve a transaction that would reduce or limit competition.

“In fact, when ABS-CBN lost its franchise in 2020, it ceased to be the dominant player in the broadcast segment, and TV5 has not yet attained dominant status in the same sector,” Ridon said.

He urged the rivals-turned-partners to do a voluntary review, given the size of the transaction and the entities involved.

The review is not compulsory, since the deal falls below the P50 billion threshold to merit such an assessment, Ridon said.

In a statement, PhCC Officer-in-Charge Chairman Johannes Bernabe said he could direct the agency’s mergers and acquisitions office to find out if the effects involving transactions between TV5 and ABS-CBN and Cignal and SkyCable would warrant a motu propio review.

“A merger review will determine if the transaction may result in a substantial lessening of competition in the relevant markets,” Bernabe said.

In an interview on Cignal-owned One News on Thursday night, Mediaquest Holdings President Jane Jimenez Basas said the group welcomes any investigation of the deal.

Mediaquest is the media holding company of the PLDT group owned by its Beneficial Trust Fund.

“We welcome any investigation as we are confident that this transaction is compliant with all relevant Philippine laws and regulations,” Basas said.

She said that for the moment, most of the partnership will center on improving TV5’s entertainment content as well as its regional reach.

“We want to make sure we put the best entertainment programs and improve the appeal of our network (TV5)…. At the end of the day, we believe ABS-CBN is the right partner, they are the best in the entertainment production, they have the best talent and give Filipinos better entertainment content,” Basas said.

The Kapisanan ng mga Brodkaster ng Pilipinas (KBP) also welcomed the deal, calling it an “antidote” to the current “monopoly” enjoyed by GMA.

“It should open up to healthier competition,” KBP President Herman Basbano said.

Marcos to push steps to address issues in ASEAN

The Department of Budget and Management (DBM) approved Wednesday the release of P11.5 billion to …