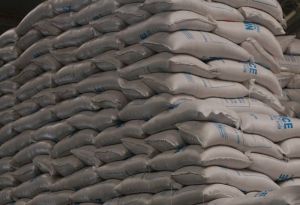 ABOUT 38,400 metric tons (MT) of rice believed to have been smuggled from Vietnam and worth more than P1 billion were unloaded at the Port of Iloilo and released by the port’s Customs authorities.

A highly reliable source at the Bureau of Customs told The Manila Times that the rice shipment arrived in 10 ships. As of Thursday afternoon, seven ships have unloaded their cargo, while the three others were waiting their turn to dock.

The source said the ships arrived between August 4 and 13.

The source said the unloading of the suspicious rice shipment at the Port of Iloilo had the blessings of top Customs officials.

The Times reached out to Iloilo port district Collector Ciriaco Ugay who at first agreed to be interviewed. Ugay, however, did not answer The Times’ follow-up calls.

Rosendo So, president of the agricultural group Samahang Industriya Ng Agrikultura (Sinag), said the cheapest rice in the market ranged from P31 to P32, while the more expensive ones cost more than P50.

During the final two to three months of the past administration, Sinag detected a discrepancy of 200,000MT between the importation records of Customs and the United Nations.

Sen. Mary Grace Poe said unabated rice smuggling defeats the goal of the government to modernize agriculture to improve the welfare of the local farmers and reduce the retail price of rice.

Rice smuggling, Poe said, remained a problem despite the passage of Republic Act 11203 or the “Rice Tariffication Law,” which deregulated rice imports.

The law allows the private sector to import with fewer restrictions with a tariff of 35 percent on grain brought in from Southeast Asia.

Under RA 11023, tariff revenues go to the Rice Competitiveness Enhancement Fund (RCEF), which is utilized for programs to increase yield and boosting the income of local farmers.

Po said the President should go after the culprits who were the same people who are entrenched in rice smuggling.

The Federation of Free Farmers (FFF) urged the President and Congress to review the law and propose the necessary amendments.

FFF National Manager Raul Montemayor said the savings from the liberalization of rice imports went only to the importers and traders, and were not passed on to consumers.

Most of the imports were also for “premium rice grades” and not the affordable grades that the National Food Authority used to import for the poor, Montemayor said.

The Customs’ Post Clearance Audit Group (PCAG) earlier disclosed that during its 2019 audit, it found that 84.45 percent of the audited importers continued to violate laws despite the easing of restrictions on rice importation.

The PCAG said the importers shortchanged the government by at least P1.417 billion in customs duties, penalties, surcharges, and interest due to undervaluation, misclassification, and/or understatement of freight and insurance charges.

It also established that undervaluation remains to be the primary risk in revenue collection from rice imports, accounting for P497 million or 36.08 percent of the total deficiency assessment.

Marcos snags $3.9B in investment pledges

Heads to roll over laptop mess