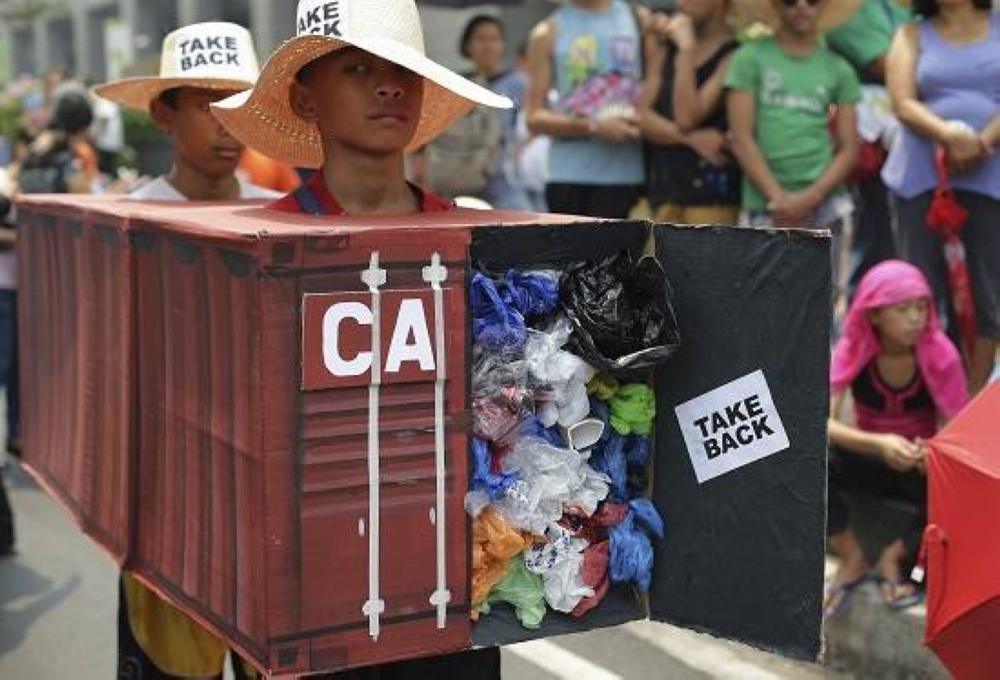 In this May 7, 2015, file photo, Filipino environmental activists wear a mock container vans filled with garbage to symbolize the 50 containers of waste that were shipped from Canada to the Philippines two years ago, as they hold a protest outside the Canadian embassy at the financial district of Makati, south of Manila, Philippines. AP PHOTO

THE new Extended Producer Responsibility (EPR) Act (Republic Act 11898) lapsed into law on July 22, and was lauded by its House and Senate backers as “a good start” toward improving the Philippines’ management of solid waste pollution, in this case, plastic. The Act addresses, at least in part, plastic produced and consumed in this country, and despite some criticisms, is a step in the right direction.

However, its impact is likely to be muted because Congress and the executive branch have for several years ignored badly needed measures to stop the importation of waste from other countries.

Several of our Asean neighbors also face the same problem, but because they are moving quickly to stop waste imports into their countries, unless the government acts quickly, the Philippines may become an even more popular dumping ground for the developed world’s garbage.

Under our current laws, a significant amount of waste from other countries — the US is the biggest source1 by a wide margin — can be legally imported; this amounted to more than 11,000 metric tons in 2019. Legal waste imports include materials such as scrap metals for reprocessing; sorted scrap plastic; so-called electronic waste or e-waste, discarded computers, and other devices; and scrap paper materials that can be recycled into new paper products. How much waste is illegally imported is anyone’s guess, as smuggled shipments are only occasionally detected; the most recent was a shipment of several containers of mixed trash from the US that arrived in Subic in 2020.

Even though the legally imported waste would appear to have some value, in reality it only adds to an already unmanageable waste problem. According to a World Bank report in March 2021, about 78 percent of the potential value of recyclable or reusable plastics produced domestically is lost each year due to the Philippines’ lack of capacity to process it. Other studies indicate that there are similar “recycling gaps” in other forms of waste as well. This situation demands that a complete ban on waste imports be implemented, whether all at once or in phases, as other countries in the region such as China, Malaysia, Thailand, Indonesia and Vietnam have already done or are in the process of implementing.

There are three ready tools to achieve this, but in all three cases the government has so far failed to act.

The first and most broad-ranging is the so-called Basel Ban Amendment, which went into force elsewhere around the world in 2019. The amendment revises the 1992 Basel Agreement, which the Philippines ratified in 1994, that originally codified definitions of waste and set limits on transnational trade in waste. Under the amendment, all exports of waste from developed countries to developing countries is simply prohibited. As recently as this past June, the Department of Environment and Natural Resource1s (DENR) issued a public statement calling for ratification of the amendment, but to no avail, as it has been completely ignored by the Senate.

The second tool is the issuance of a DENR order that would impose a ban, modifying a controversial 2013 order that allowed some waste imports. In 2019, the DENR announced that it was undertaking a review to issue such an order, and it was anticipated that the policy change would be announced within a few months. However, no further action was taken, so the problematic 2013 order remains in effect.

Finally, Congress can pass a law to impose a ban on imported waste, which would strengthen the Basel Ban Amendment, provide reasonable protection for the country even if the amendment is not ratified, and obviate the need for action on the part of the DENR. As of the beginning of 2020, there were no fewer than 22 bills on a waste import ban pending in the House, along with a number in the Senate; none of these advanced beyond the committee stage.

As skeptics of the EPR Law have pointed out, its effectiveness depends on there being other laws and regulations that complement what it is trying to achieve in more effectively managing waste. The government’s failure to take the easy and almost entirely cost-free step to ban waste imports simply undermines every other effort to reduce waste and minimize harm to the environment.