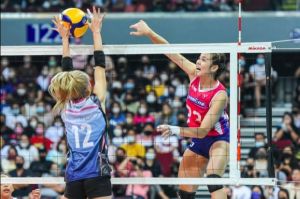 Creamline’s Jeme Galanza attacks against a Taiwanese bocker during the finals of the PVL Invitational Conference at the Mall of Asia Arena in Pasay City on Aug. 14, 2022. PVL PHOTO

In the 2018 edition of the AVC Cup for Women, the last tournament held before the biennial tourney was shelved for four years due to the Covid-19 pandemic, the Philippines and Vietnam finished fifth and ninth, respectively.

Now, both countries are eager to eclipse what they've accomplished in 2018.

Creamline-Philippines, however, isn't at full strength on Sunday, as it will be without its star and captain Alyssa Valdez, who will miss the entire tourney due to dengue.

Meanwhile, setter Jia Morado and coach Sherwin Meneses are a game-time decision as they've been put under health and safety protocols.

“We are fresh from our tournament, we're one team, we're one professional team, we've been selected after winning the championship of our local league, we've already jelled and know each other — [those are] our advantage in the tourney,” said Gumabao.

Sato and Galanza were also teammates with Valdez and de Guzman in the 2018 AVC Cup in Thailand.

Meanwhile, Vietnam's lineup has yet to be revealed by the organizers at press time.

The Philippines is in Group A with Vietnam, Iran, South Korea, and China. Group B teams are Japan, Thailand, Chinese-Taipei and Australia.

The top eight teams after the pool play will advance to the quarterfinals.