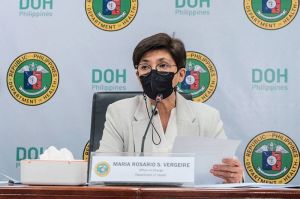 THE government will never distribute any personal protective equipment (PPE) that did not pass stringent quality standards, the Department of Health (DoH) said.

This comes after the Commission on Audit (CoA) flagged the Procurement Service-Department of Budget and Management (PS-DBM) for not submitting the Certification of Medical Device Notification (CMDN) requirement for seven PPE contracts worth P1.386 billion.

A CMDN from the Food and Drug Administration is required prior to the commercial sale and distribution of medical devices such as PPE sets, which include medical-grade N95 face masks, surgical masks, shoe covers, gloves, head covers and gowns.

CoA said that two contracts from the PPE procurement did not include the product notification as a requirement for a licensed importer or wholesaler of personal protective equipment, while in five contracts, the supplier failed to submit the CMDN despite it being required.

A lack of CMDN means that the PPE sets are not authorized for sale or public use, adding that the PS-DBM cannot assure its client-agencies of the safety of the PPE, especially for the medical staff users who are exposed to the Covid-19 virus.

State auditors also flagged the PS-DBM for not exercising due diligence in procuring the personal protective equipment or even in the review and evaluation of the technical capacity of the suppliers to deliver the goods to be procured using the non-discretionary criteria.

In a briefing on Friday, Health Officer in Charge Maria Rosario Vergeire stressed that they will never give to their implementing units any PPE that did not pass their stringent quality and safety standards.

She added that the CMDN issued by the FDA is one of the main requirements to be secured by prospective suppliers of personal protective equipment.

She said that they have sought clarification from the PS-DBM what are the stocks of PPEs that were distributed to the DoH.

In the same briefing, Vergeire said the government has disbursed a total of nearly P60 million to both the Philippine Heart Center (PHC) and the National Kidney and Transplant Institute (NKTI) for the allowances of health care workers.

It comes after employees from both hospitals and other government owned and controlled hospitals staged a protest action on Friday calling for the release of their delayed benefits under One Covid-19 Allowance (OCA).

They also said that DoH officials had been “inept, irresponsible and unreliable in doing their duties to ensure that health workers’ well-being is timely met during a public health emergency.”

“In this time of public health emergency, the DoH must act accordingly. Our One Covid-19 Allowance must be provided to us in a timely manner,” Salome Ejes, acting president of the Philippine Heart Center Employees Association-Alliance of Health Workers, said.

But Vergeire said that they have not been remiss in the payment of OCA benefits to health workers in the said hospitals for the months of January to March 2022.

“As of August 12, the DoH has disbursed a total of P41.6 million for the OCA of eligible personnel from the NKTI; also we have issued P18.3 million for Philippine Heart Center,” Vergeire said.

Vergeire said that the DoH is now in coordination with the DBM for the release of OCA benefits for the months of April to June.

“The initial release by the DBM was only P7.9 billion to cover these benefits, there are other unprogrammed funds that were requested from DBM that would be released to cover the deficiencies and that would be from April to June,” Vergeire added.

She also said that the DoH is also looking for funding for the payment of health emergency benefits from July 2021 to this year under the Health Emergency Allowance under the previous administration.

Today 13 years ago, ‘Ondoy’ laid waste to the land

Classes in NCR called off

San Ildefonso, Bulacan Five rescuers were killed in the Philippines after they were sent to …