Breaking News
Home / Headline / ‘Tagle could be next Pope’

‘Tagle could be next Pope’ 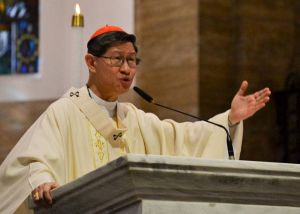 FORMER Manila archbishop Cardinal Luis Antonio Tagle is one of two leading candidates to possibly succeed Pope Francis, according to a report by a London-based Roman Catholic monthly newspaper.

The Catholic Herald said the appointment of a “pope from the developing world — such as the Philippines’ Cardinal Luis Antonio Tagle — would be hailed by liberals, given the changing demographics of the Church.”

The other leading candidate is Hungary’s Cardinal Péter Erdő, the archbishop of Esztergom-Budapest.

“A contest between Erdö and Tagle would show a Church at a crossroads, not just between conservatives and liberals, but between the forces of traditionalism in Europe — the original heart of Catholicism — and the changing face of the faith, focused more in the developing world, yet still largely conservative in outlook, not least on LGBT issues,” the Catholic Herald said in the article titled “Erdő vs. Tagle: the battle to be the next Pope” posted on its official website on Aug. 5, 2022.

“If symbolism matters, then Erdő vs. Tagle would be a contest not just of ideas but of perception and identity,” it added.

The report came out amid speculations about the possible resignation of Pope Francis.

Even bookmakers predict an Asian cardinal could succeed Francis.

A recent Newsweek article said Cardinal Tagle has been given “5/1 odds” of being elected the next pope by British bookmakers Online Betting Guide (OLBG).

It noted that Tagle “is viewed as a top papal contender, thanks to a series of promotions that make Francis’ esteem for him clear.”

Hailed as the “Asian Francis,” Tagle was appointed by Pope Francis to lead the Congregation for the Evangelization of Peoples in 2019.

Last June, the former Manila archbishop was also appointed to the Congregation for Divine Worship and the Discipline of Sacraments.

Before he was appointed by Pope Francis to the Vatican, he also headed Caritas Internationalis.

Tagle was made a cardinal by Pope Benedict 16th.

Rumors continue to abound about Francis’ future after the Holy Father recently declared in an interview that he can no longer travel like he once did, and one day he may have to retire.

The pope said he might resign if poor health made it impossible to continue.

It was also reported that he said he would not live in the Vatican or return to his native Argentina if and when he retired.

While denying he was planning to retire anytime soon, the pontiff said “the door is open” after Benedict 16th had stepped down.

At the start of his papacy, Pope Francis had said he would like to see the resignation of popes become normalized, and later also said he had a feeling his pontificate would be brief, describing his predecessor’s decision to step down as “courageous.”

Jupiter will be its brightest in 59 years Monday. Here’s how to see it for yourself

You may have noticed a bright “star” in the eastern sky after sunset, but that’s …