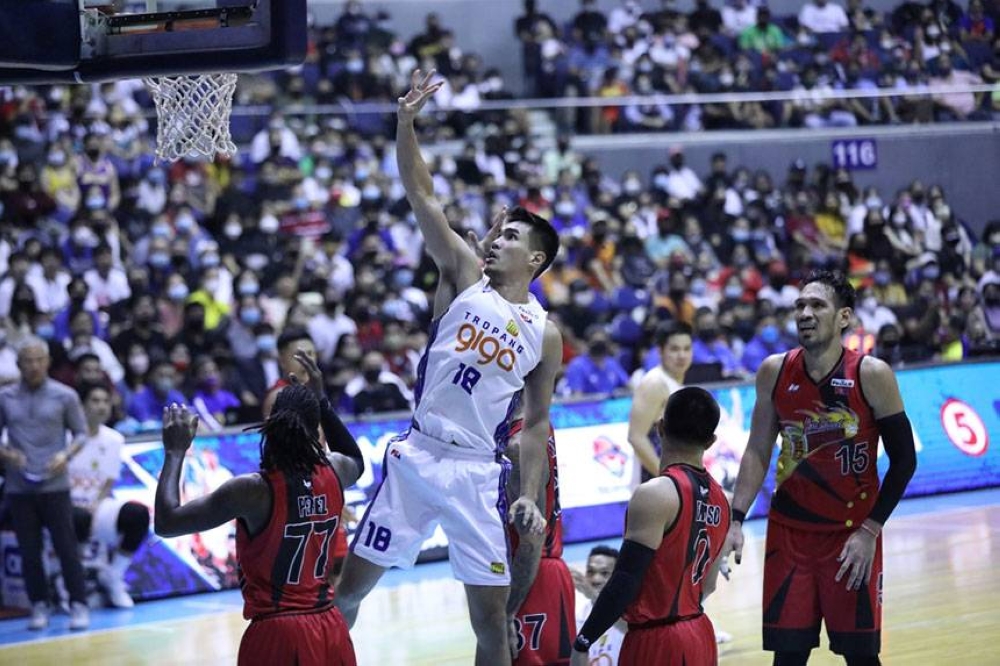 ONE VERSUS FOUR Troy Rosario and the TNT Tropang Giga seek to repeat against the San Miguel Beermen in Game 2 of the PBA Philippine Cup Finals tonight, Aug. 24, 2022, at the Smart Araneta Coliseum. PBA IMAGE

IT couldn't get any closer.

Game 1 in the clash between two heavyweight teams for the championship of the PBA Philippine Cup had to be decided by a buzzer-beating jumper from veteran guard Jayson Castro, who towed the TNT Tropang Giga to an 86-84 triumph over the San Miguel Beermen last Sunday.

Expect Game 2 to be equally exciting today, August 24, as both teams brace for another down-to-the-wire battle in their best-of-seven titular duel.

The Beermen will try to equalize the series and set the balance in this championship encounter while the Tropang Giga try to notch their second win and take a step closer into their bid of repeating as champions of the tournament.

The Tropang Giga and the Beermen collide at 5:45 p.m. at the Smart Araneta Coliseum in Quezon City.

Castro's buzzer-beater was enough to create a separation between TNT and San Miguel, but outside of his heroic act, there are several heroes who stood out for the Tropang Giga, who did a little bit of everything.

In the series opener, it was Roger Pogoy, who rose to the occasion and carried much of the load for the Tropang Giga.

Pogoy knocked in 26 points on a 10-of-17 shooting from the field. He and Mikey Williams combined for 22 of the 33 points scored by TNT in the third period as the team also held San Miguel to just 15 points.

Overall, defense has become a telling factor in the series opener.

San Miguel dictated the early goings when it forced TNT to 13 turnovers in the first half and that gave the Beermen nine points coming from those miscues during that period.

In the second half, it was TNT's turn to switch its defensive button and forced San Miguel to 12 turnovers, resulting in 23 points from those errors.

San Miguel was led by June Mar Fajardo in Game 1 as the six-time Most Valuable Player finished with 26 points and 16 rebounds. He, however, needs more production from his teammates for the Beermen to equalize the count tonight.