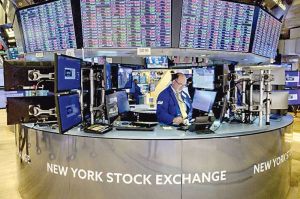 HONG KONG: Markets advanced with oil prices on Wednesday following a rally on Wall Street, with Asia given a lift after China’s premier called for more measures to boost the East Asian country’s struggling economy.

Investors remain on edge as they try to navigate an uncertain landscape while central banks hike interest rates to fight runaway inflation which, in turn, fueled fears of a possible recession.

While officials at the Federal Reserve (Fed) and its peers are expected to keep tightening monetary policy for the rest of the year, talk is building that they would be able to ease up in 2023 — and maybe even cut rates — if the pace of price increases comes down.

Minutes from the Fed’s July meeting will be pored over when they are released later in the day, with investors hoping for some insight into policymakers’ thinking and an idea of its plan for next month’s gathering.

“We expect the… minutes to have a hawkish tilt,” Carol Kong of the Commonwealth Bank of Australia said. “We would not be surprised if the minutes show [officials] considered a 100 basis points increase in July.”

The United States central bank lifted rates by 75 points in both June and July.

Forecast-beating earnings from retail titans Walmart and Home Depot provided optimism that US consumers remain resilient, even as inflation remains elevated and borrowing costs are rising.

In a sign of the work ahead for banks in battling inflation, figures on Wednesday showed that prices rose in the United Kingdom last month at their fastest pace since 1982 as food costs rocketed. The news sent the sterling sharply higher against the dollar.

After a slow start, Asia picked up on the positive lead from Wall Street, helped by hopes for some stimulus by finance chiefs in China.

The People’s Bank of China announced a surprise interest rate cut on Monday and a report on Tuesday said Chinese Premier Li Keqiang called on six key provinces — accounting for about 40 percent of the economy — to bolster pro-growth policies.

The moves come after the latest batch of data showed the economy remained under pressure.

Analysts said markets were concerned about the debilitating impact of lockdowns and other strict containment measures implemented as part of Beijing’s zero-Covid strategy.

“Not only do investors hate uncertainty, but the negative economic impact of this policy is [also] increasingly visible,” he added.

In early trade, London stocks were up, along with those of Paris and Frankfurt.

Equities have enjoyed several weeks of gains since hitting their June lows, and while the initial bounce was broadly seen as a bear market rally, there is hope that they may have already reached their nadir.

The “bear market rally calls are suddenly becoming quiet these days. The risks of the Fed sending the economy into a recession are easing as inflation is slowly coming down,” he added. “The Fed’s soft landing seems achievable and that has allowed this rally to continue.”

Oil prices bounced on Wednesday after dropping for three straight days on demand worries as economies slow, while the possibility of an Iran nuclear deal has led to talk of a boost to supplies.

Elon Musk offers to go ahead with Twitter takeover after all

Sorry Apple: New European rules about phone chargers will finally mandate the U in USB

Minimum wage goes up in 6 provinces, but some advocates say workers need more

U.K. government makes U-turn on plan to cut taxes for the rich to fight inflation