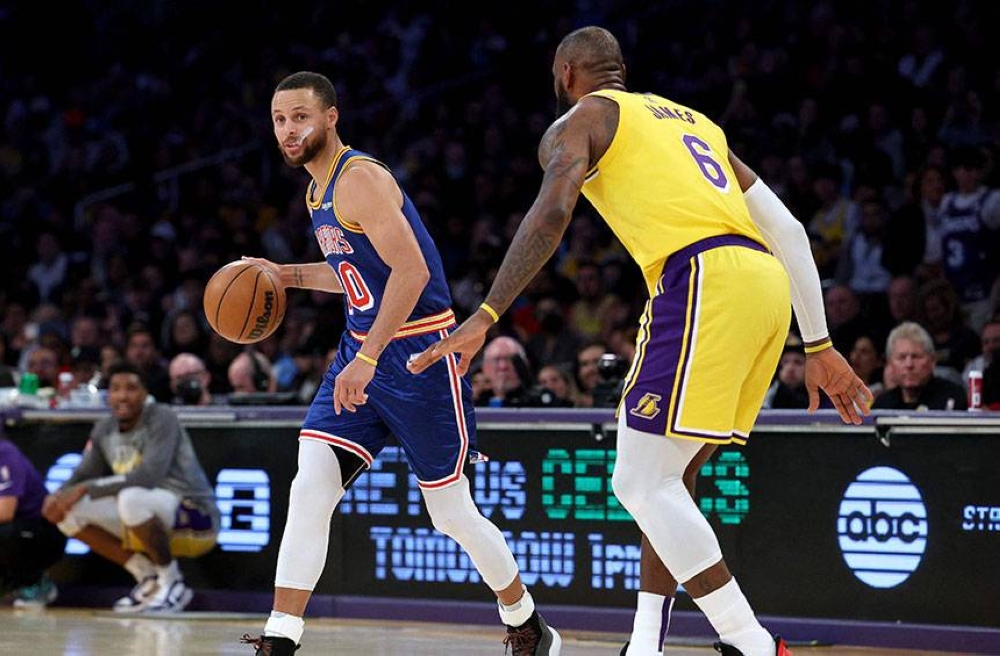 MARQUEE MATCHUP Stephen Curry of the Golden State Warriors and LeBron James of the Los Angeles Lakers are set to meet in the opening game of the 2022-23 NBA season on Tuesday, Oct. 18, 2022. PHOTO BY HARRY HOW/AFP

NEW YORK: Defending champion Golden State will host the Los Angeles Lakers and Boston will entertain Philadelphia when the 2022-23 NBA season opens on October 18 in a league schedule announced Wednesday (Thursday in Manila).

Each team will play 82 regular-season games through April 9 with a play-in tournament ahead of the April 15 start of the playoffs and the NBA Finals commencing on June 1.

The schedule sees the resumption of international regular-season contests with the Miami Heat playing the San Antonio Spurs on December 17 in Mexico City and the Chicago Bulls meeting the Detroit Pistons in Paris on January 19.

There will be five games played on Christmas Day for the 15th consecutive year, tipping off with Philadelphia at New York and followed by the Lakers at Dallas, Milwaukee at Boston and Memphis making a December 25 debut at Golden State before the holiday slate concludes with Phoenix at Denver.

In a move to encourage fans to vote, no NBA games will be played on US Election Day, November 8, while all 30 teams will play on November 7 as well as April 9 to end the campaign.

On opening night, the 76ers will visit the reigning Eastern Conference champions before the NBA champion Warriors receive their championship rings before hosting superstar LeBron James and the Lakers.

On October 19, New York will visit Memphis and Dallas go to Phoenix in a rematch of a Western Conference semifinal series from last season.

The next night, Milwaukee travels to Philadelphia while the Los Angeles rivals the Lakers and Clippers meet.

October 21 will feature Boston at Miami and Denver at Golden State.

There will be two rematches of last season's NBA Finals when the Warriors play host to Boston on December 10 and visit the Celtics on January 19.

The week of January 23 will be NBA Rivals Week, a series of games featuring various league rivalries.

A trio of January 28 contests include the Lakers at Boston, New York at Brooklyn and reigning NBA Most Valuable Player Nikola Jokic leading Denver against Philadelphia and MVP runner-up and 2021-22 scoring leader Joel Embiid.