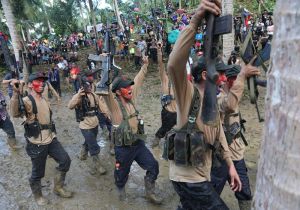 THE Communist Party of the Philippines (CPP) and its armed wing the New People’s Army (NPA) are not terrorist organizations, a Manila trial court has ruled.

The Manila Regional Trial Court Branch 19 handed down the ruling last Wednesday as it dismissed a petition of the Department of Justice (DoJ) on Feb. 21, 2018, to declare the CPP-NPA as a terrorist organization.

The DoJ filed the petition under Section 17 of the Human Security Act (HSA) of 2007, which requires a ruling by a regional trial court before an organization can be officially labeled as a terrorist.

In her ruling, Judge Marlo Magdoza-Malagar said that the group’s Ten Point Program “readily shows that the CPP-NPA is organized or exists, not for the purpose of engaging in terrorism.”

Magdoza-Malagar noted that the Human Security Act defines terrorism as the commission of piracy and mutiny in the high seas; rebellion or insurrection; coup d’etat; murder; kidnapping and serious illegal detention; crimes involving destruction of property “thereby sowing and creating a condition of widespread and extraordinary fear and panic among the populace, in order to coerce the government to give in to an unlawful demand.”

“It is not difficult to see how the CPP-NPA’s resort to ‘armed struggle’ and the violence that necessarily accompanies the same, as the sanctioned means to achieve its purpose(s) may have earned the CPP-NPA the terrorist label,” the judge said.

In determining whether the group committed “terrorist acts,” the court looked at nine incidents of atrocities its members allegedly committed as testified by government witnesses. These are:

– The failed attempt to kill a teacher in October 2020

– The burning of a chapel and residential houses in May 2020

– The abduction of seven civilians in May 2019.

Magdoza-Malagar said the eyewitnesses identified the suspects only through the clothes they wore. It takes more than a certain manner or mode of clothing to establish that a person is a CPP-NPA member, she said.

“In the absence of any evidence that the official uniform of the members of the CPP-NPA consists of an all-black outfit, this court cannot give credence to the witnesses’ identification,” the judge said.

Magdoza-Malagar said none of the nine incidents caused “widespread and extraordinary fear and panic” among the populace.

She also cited the difference between terrorism and rebellion as pointed out in a 2017 Supreme Court ruling, the former being considered as larger in scope.

The Supreme Court stated that if the crime committed is for political purposes, it is rebellion.

If the primary objective is to sow and create widespread and extraordinary fear and panic among populace to coerce the government to give in to an unlawful demand, the crime is terrorism.

Lawyer Lorenzo “Larry” Gadon said on Thursday that the denial of the Manila court to label the CPP-NPA as a terrorist group does not count.

“It does not really matter because it is within the power of the executive branch to declare them as a terrorist group in the exercise of its police powers that is inherent to the State,” Gadon told The Manila Times.

He said the President has the authority to declare the CPP-NPA as a terrorist group in exercising police powers to protect the security and integrity of the state.

“The President has access to all information and data to enable him to exercise such power,” said Gadon, the lone senatorial candidate of the Kilusang Bagong Lipunan which was founded by late president Ferdinand Marcos Sr., the father of President Ferdinand “Bongbong” Marcos Jr.

“I just don’t know why the petition was filed in the first place, which I find it unnecessary,” he said.

During a Senate hearing Tuesday, Sen. Ronald “Bato” dela Rosa said the government should drop the idea of a negotiated peace as a solution to the communist insurgency problem since the CPP-NPA has been deceiving the government all along.

“These people are only fooling us. We’ve been talking to them for many years and nothing happened out of it. We are sincere, but they’re not. Let’s not allow them to fool us further, especially now that the CPP-NPA are already on their knees because of the NTF-Elcac (National Task Force to End Local Communist Armed Conflict),” dela Rosa said.

The former national police chief presided at the hearing of the Senate Committee on National Defense and Security, Peace, Unification, and Reconciliation, joint with the Committee on Public Order and Dangerous Drugs, which he leads, as well as the Committee on Finance, to discuss Senate Bill (SB) 200 which seeks to institutionalize the NTF-Elcac by establishing the National Council to End Local Communist Armed Conflict.

The NTF-Elcac was created in December 2018 by Executive Order 70 issued by then president Rodrigo Duterte.

“What are they [CPP-NPA] doing while we are talking peace with them? They are there consolidating their people, regrouping, rearming themselves, and recruitment because they’re free to go around the communities. You know, enough of this for me,” he told government security officials who attended the hearing.

“Let’s finish the problem and we have to be serious about it. As I’ve said, I have retired from the service with all the scars in my body, with all the death that I have seen. Do I have to wait for my son, who just graduated from the academy, to experience the same problem that I faced when I was young, when I was a lieutenant until I retired?… We are not giving a better future for the youth if we do not finish this problem now,” dela Rosa said.

PH wary of looming ‘arms race,’ use of nuclear weapon amid Russia-Ukraine conflict