Judge homers twice, closing in on 61 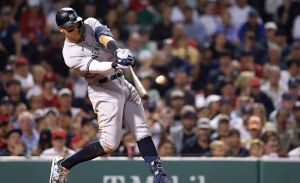 57 HOMERS AND COUNTING Aaron Judge of the New York Yankees hits a home run against the Boston Red Sox during the eighth inning at Fenway Park on Wednesday, Sept. 13, 2022 (September 14 in Manila), in Boston, Massachusetts. PHOTO BY MADDIE MEYER/AFP

NEW YORK: New York Yankees slugger Aaron Judge homered twice in a 7-6 victory over the Red Sox in Boston on Tuesday (Wednesday in Manila) to edge closer to the American League record of 61 in a season.

Judge connected for solo shots in the sixth and eighth inning — his 56th and 57th homers of the season stretching his major league lead.

Maris' mark set a Major League record in 1961, breaking the record of 60 Babe Ruth had established in 1927.

Both of Judge's blasts tied the game, which went to 10 innings.

The first came on a hanging curveball from Nick Pivetta that Judge belted 383 feet into the Red Sox bullpen.

In the eighth Judge smacked a slider from Garrett Whitlock over the Green Monster left field wall.

It was Judge's 10th multi-homer game of the season. Hank Greenberg holds the American League record for multihomer games of 11 — set in 1938.

Judge also ended a string of five games without a homer, although he had reached base in 13 of 24 at-bats going into the contest.

Despite the little dry spell, he remains on pace to hit 65 home runs this season.

2022-09-13
AtinitoAdmin
Share
Previous On the President’s 65th birthday, we pray for him and wish him well
Next Letran opens season with OT win vs JRU