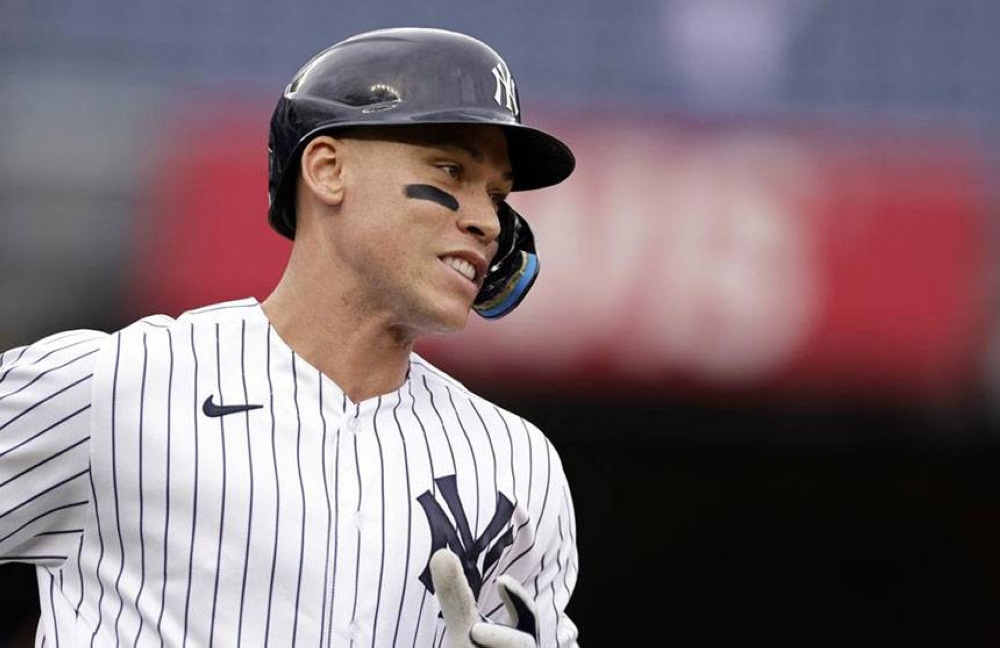 HOME RUN LEADER New York Yankees’ Aaron Judge rounds the bases after hitting a home run during the fourth inning of the first baseball game of a doubleheader against the Minnesota Twins on Wednesday, Sept. 7, 2022 (September 8 in Manila), in New York. AP PHOTO

NEW YORK: Aaron Judge started the first-game comeback with his major league-leading 55th home run, Isiah Kiner-Falefa hit a go-ahead grand slam in the nightcap and the New York Yankees swept a doubleheader from the Minnesota Twins 5-4 and 7-1 on Wednesday (Thursday in Manila).

Kiner-Falefa sparked a two-run 12th in the opener with a tying leadoff RBI single. He erased a 1-0 deficit in the fourth inning of the second game when he sent a belt-high slider from Joe Ryan (10-8) into the left-field seats. It was Kiner-Falefa's first slam among 19 career home runs.

Oswaldo Cabrera stopped an 0-for-25 slide with a game-ending single in the opener.

Gerrit Cole (11-7) struck out a season-high 14 in the night game, allowing five hits and two walks in 6 2/3 innings. Lucas Luetge got his second save.

Carlos Correa hit a third-inning homer for the Twins.

In the opener, Judge homered for the fourth straight game, driving a changeup to left in the fourth inning, the only blemish of Louie Varland's otherwise outstanding major league debut.

Judge set the Yankees record for right-handed hitters by surpassing the 54 homers hit by Alex Rodriguez in 2007.

Gleyber Torres hit a two-run homer and Greg Weissert (3-0) earned the win for the Yankees. Jose Miranda homered for Minnesota, and Trevor Megill (3-3) took the loss.

In Baltimore, Alek Manoah retired 22 of his final 23 hitters in an impressive eight-inning performance, and Toronto wrapped up a successful series in Baltimore.

The Blue Jays won three of four to take a 4 1/2-game lead on Baltimore for the last wild card in the American League. Manoah (14-7) allowed a run in the first, but the Orioles didn't manage another baserunner until the sixth.

Toronto scored three times in the fifth off Dean Kremer (6-5), who allowed two earned runs and six hits in 5 1/3 innings.

Manoah allowed three hits and a walk, striking out five. Jordan Romano struck out two in a perfect ninth for his 31st save in 35 chances.

St. Louis moved 9 1/2 games ahead of Milwaukee for the NL Central lead, winning for the 20th time in 23 home games.

Edman doubled to left off reliever Kyle Finnegan (5-3) to cap the rally.

Paul Goldschmidt hit his 35th homer, a solo homer off Cory Abbott leading off the fourth. Goldschmidt leads the NL with 108 RBIs.

Jake Woodford (4-0) pitched the ninth for the victory.