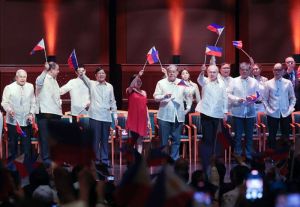 US VISIT President Ferdinand ‘Bongbong’ Marcos Jr. and members of his delegation meet with the Filipino community at the New Jersey Performing Arts Center on Sunday, Sept. 18, 2022 (September 19 in Manila). Photo from the Office of the Press Secretary

PRESIDENT Ferdinand “Bongbong” Marcos Jr. said he wants to meet with United States President Joe Biden and other heads of state who will attend the 77th United Nations General Assembly (UNGA) to strengthen alliances and attract more investments to the Philippines.

Marcos arrived in New Jersey on Sunday (Monday in Manila) for his weeklong state visit to the US.

Speaking before a group of Filipinos in New Jersey who welcomed him, the President said he was eager to hold “bilateral or multilateral” talks with the leaders of other nations on the sideline of the General Assembly meeting.

Marcos said he also looks forward to a one-on-one with Biden. “Our relations with the United States remain strong and I believe we will make them stronger in the coming years,” he said.

The President said he also wants to sit down with US business leaders to encourage them to invest in the Philippines.

“We want to stimulate the economy. When there is a new business, there is work,” Marcos said.

He will address the General Assembly Tuesday in New York time (early Wednesday in Manila). He will be the second speaker in the group’s afternoon session.

The President is expected to present the country’s vision of people-centered development, highlighting his administration’s thrust for recovery after years of pandemic-related lockdowns.

“I am also here to make sure that we will explain where the Philippines is now and what can be done because of our opinion when we come out of the pandemic and say that we have to fix our economy,” Marcos said.

He affirmed the Philippines’ commitment to the ideals of the UN, citing the organization’s role in fostering international dialogue and cooperation.

Marcos said he will explain “the role the Philippines will play as a responsible member of the family of nations in addressing these concerns.”

“Habang nandito ako (While I’m here), we will be working hard to get other things done for the country besides addressing the UN General Assembly on Tuesday, the same way my father, President Ferdinand Marcos, and my mother, Imelda Romualdez-Marcos did on several occasions during his incumbency,” Marcos said.

The President cited the need to create partnerships with other countries to help overcome the current global crisis.

“I am here to make sure na ipapaliwanag natin kung nasaan na ang Pilipinas at kung ano ang mga maaaring gawin dahil sa ating palagay sa pagdating, paglabas natin ng pandemya at sinasabi na patapos na ay kailangan nating ayusin ang ating ekonomiya (I am here to explain where the Philippines stands and what we can do when it comes to the pandemic, which is ending, since the economy still needs fixing),” he said.

The 77th session of the General Assembly will be its first in-person meeting among the heads of state since Covid-19 broke out in 2020.

Marcos will be the first Philippine president to deliver a speech in person at the assembly since the late president Benigno “Noynoy” Aquino 3rd in 2010.

He will also be the first leader from the Association of Southeast Asian Nations to deliver a statement at this year’s High-Level General Debate.

The annual gathering will have more than 150 world leaders presenting their perspectives on global issues.