Peso dips to new low vs US dollar 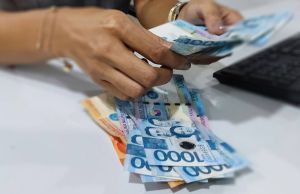 THE Philippine peso closed at a new low of P56.77 to the US dollar on Friday and fell to as low as P56.90 during intraday trading at the Philippine Dealing System (PDS).

The widening policy differences between the United States Federal Reserve and the Bangko Sentral ng Pilipinas (BSP), which has hinted it may slow the pace of interest-rate increases, have also put pressure on the peso, according to analysts.

The peso also had to contend with rising imports that pushed the trade deficit to an all-time high in June.

“We see the peso facing further weakness as imports increase, while exports are dragged down by weakening Chinese demand, widening the trade deficit,” said Trinh Nguyen, a senior economist at Natixis SA in Hong Kong.

“A hawkish Federal Reserve also puts pressure on the peso, which means the central bank has to respond with jumbo hikes to arrest the slide,” added Nguyen.

The peso might slide further to P57 to a dollar by year’s end, analysts predict.

However, the anticipated seasonal rise in remittances from overseas Filipinos and export sales revenues converted to pesos, particularly during Christmas, could boost the peso exchange rate this fourth quarter.

Rizal Commercial Banking Corp. Michael Ricafort said these factors are based on recurring trends over the past few years or decades.

Ricafort added, however, that the peso has been on the downturn against the dollar for the past seven months.

PBBM sees ‘poorest of poor’ to gain from fishery project

Inmates to be classified per crime to unclog jails