NEW YORK: Iga Swiatek surged to the third Grand Slam title of her career with a maiden victory at the US Open on Saturday (Sunday in Manila), defeating Tunisia's Ons Jabeur in straight sets to extend her remarkable finals winning streak. 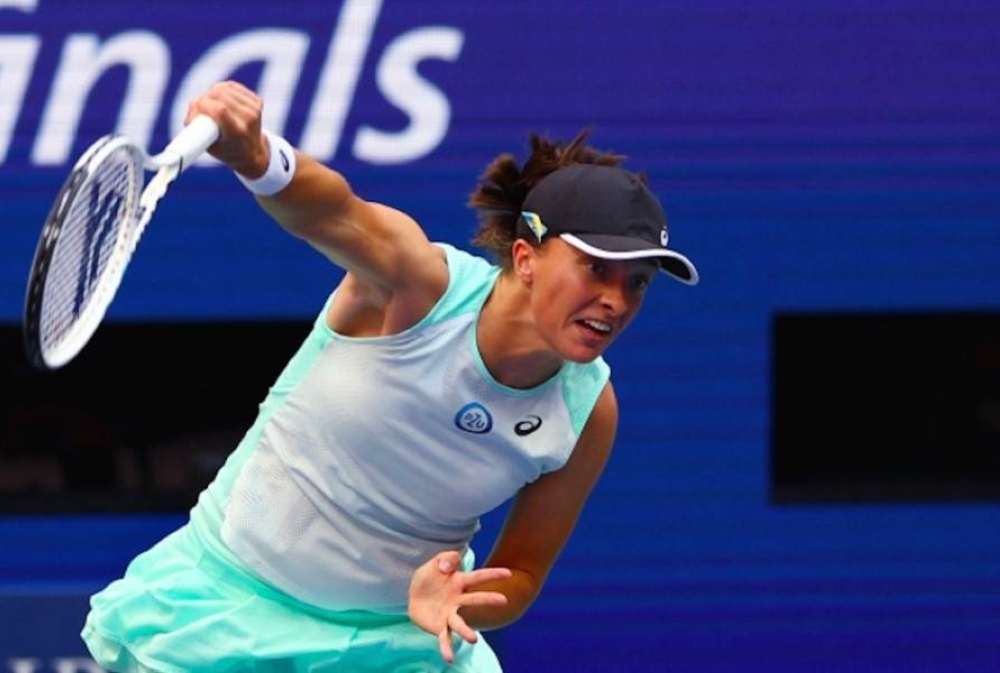 Iga Swiatek of Poland serves against Ons Jabeur of Tunisia during their women’s singles final match of the 2022 US Open at USTA Billie Jean King National Tennis Center on Saturday, Sept. 10, 2022 (September 11 in Manila), in the Flushing neighborhood of the Queens borough of New York City. AFP PHOTO

The 21-year-old world number one from Poland saw off a second set fightback from history-chasing Jabeur to prevail 6-2, 7-6 (7/5) in 1hr 52min at Arthur Ashe Stadium.

The win was Swiatek's second Grand Slam title of 2022 to set alongside her French Open victory in June, which followed her maiden Grand Slam win at Roland Garros in 2020.

Swiatek's victory was her 10th straight win in a final. She is unbeaten in finals since suffering a lone reverse in her first WTA final in Lugano three years ago.

Swiatek collapsed on court in relief after a win that saw her pocket a hefty $2.6 million in prize money.

“I'm really glad it's not in cash,” she quipped as she was presented with her winner's check for a tournament she entered with low expectations when the season began.

“I wasn't sure if I was on the level yet to win a Grand Slam, especially at the US Open where the surface is so fast,” she said.

But the loss was another agonizing near-miss for Jabeur, who had been bidding to become the first woman from Africa to win a Grand Slam title. The 28-year-old from Tunis had also been beaten in the final of Wimbledon in July.

Jabeur impressed en route to the final, dropping only a single set and stitching together a string of assured performances.

But she was in trouble almost from the get-go against the clinical Swiatek, who was into her stride quickly with her serve and signature forehand functioning smoothly.

Jabeur by contrast looked jittery and was broken to love in her first service game.

Swiatek held easily to go 3-0 up with only eight minutes gone in the first set.

Jabeur did threaten a revival when she held and then broke to close the gap to 3-2.

But the fifth seed was let down again by her shaky service game, a problem throughout Saturday's final, and Swiatek broke back for a 4-2 lead.

Jabeur was broken again as she served to stay in the set and Swiatek took the first set.

Swiatek threatened to run away with the second set after breaking Jabeur and holding to go 3-0 up.

Yet Jabeur showed great determination to break Swiatek to cut the deficit to 3-2.

Once again however Jabeur was unable to make the service break count and Swiatek broke again for a 4-2 lead.

This time, though, Jabeur dug deep to claw her way back into the contest, assisted by a slice of luck when a Swiatek return clipped a net cord to clinch a service break.

Jabeur held to level the score at 4-4 and suddenly the momentum had shifted.

The next three games went with serve and Jabeur was left serving to stay in the match. She fought off a match point at 5-6 and 30-40 down before holding for 6-6.

Jabeur recovered from 4-2 down to lead 5-4 in the tie break, but it was Swiatek who showed greater composure, converting her second match point when Jabeur smacked a return long.

2022-09-10
AtinitoAdmin
Share
Previous Four-time NBA champ Ginobili enters Hall of Fame
Next 2 key climate tipping points are in Canada. And a new study suggests we may topple them