Tagovailoa stretchered off as Dolphins lose 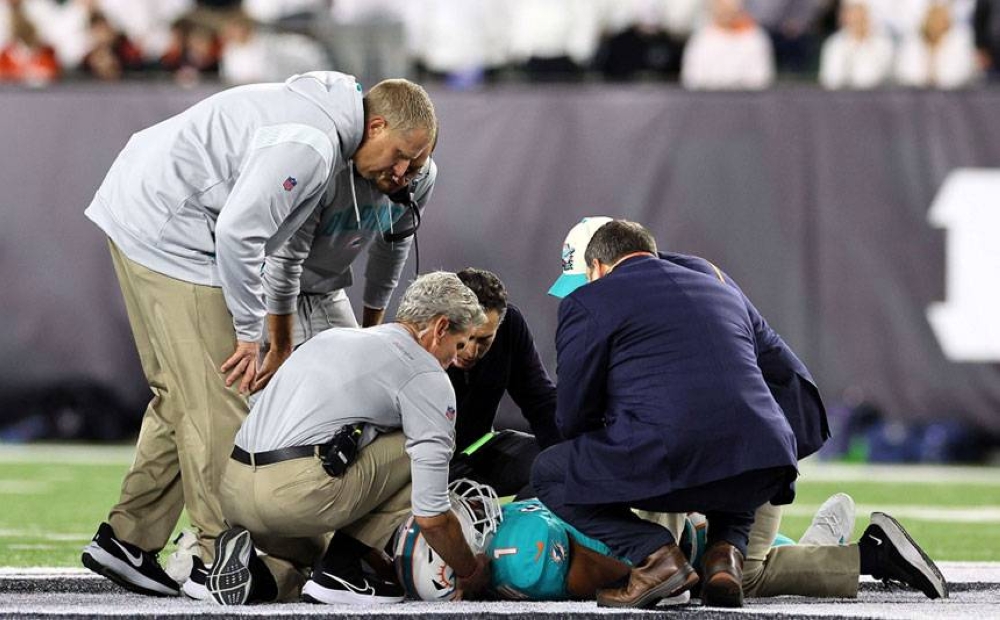 SCARY MOMENT Medical staff tend to quarterback Tua Tagovailoa of the Miami Dolphins after an injury during the second quarter of the game against the Cincinnati Bengals at Paycor Stadium on Thursday, Sept. 29, 2022 (September 30 in Manila), in Cincinnati, Ohio. PHOTO BY ANDY LYONS/AFP

LOS ANGELES: Miami quarterback Tua Tagovailoa was stretchered off with a concussion during his team's defeat to Cincinnati on Thursday (Friday in Manila), sparking criticism over the decision to let the Dolphins star play just days after he had been evaluated for a head injury.

Tagovailoa was carried off the field after being sacked heavily in the second quarter in Cincinnati, his head slamming violently into the turf after a tackle from the Bengals' Josh Tupou.

Replays of the incident showed Tagovailoa's fingers contorted into an unnatural position, a symptom known as a “fencing response” that is associated with head injuries.

The 24-year-old was kept on the field for around 10 minutes before being taken away on a stretcher as concerned Dolphins staff gathered around midfield.

He was subsequently taken to the University of Cincinnati Medical Center for evaluation for head and neck injuries.

The Dolphins later said in a brief statement that Tagovailoa was “conscious and has movement in all his extremities.”

He was discharged from hospital and was due to travel back to Florida with his teammates.

The incident once again drew attention to the NFL's record of dealing with concussion and head injuries.

On Sunday, Tagovailoa left the field during the Dolphins' victory over the Buffalo Bills after suffering a heavy hit in the first quarter.

Tagovailoa appeared to be dazed and unsteady on his feet following that incident and was subsequently evaluated for a concussion.

He was allowed to return to the game, however, after Dolphins coaching staff attributed his unsteadiness to a lower back injury.

The verdict on Tagovailoa's injury on Sunday was greeted with scepticism by many commentators, however, while the NFL Players Association said it was initiating an investigation into the incident.

Dolphins coach Mike McDaniel admitted on Thursday that Tagovailoa's latest injury had been a “scary moment.”

“That is not part of the deal that anyone signs up for even though you know it's a possibility in football, to have someone taken off on a stretcher,” McDaniel said after the Dolphins' 27-15 loss.