Harris urges nations to honor The Hague decision on EEZ

Share
All nations must respect the 2016 Permanent Court of Arbitration decision that rejected China’s expansive claims in the South China Sea and upholding the Philippines’ exclusive economic zone in the area, US Vice President Kamala Harris said Tuesday.

“The United States is proud of our longstanding ties with the people of the Philippines. I am here in Palawan to underscore the importance of our partnership in order to create economic opportunities, protect coastal ecosystems, maintain peace and stability, and uphold international rules and norms here in the South China Sea and around the world. To the Philippine Coast Guard, you are on the frontlines of standing up for the international rules-based order,” said Harris, the highest ranking US government official to visit Palawan.

“As you patrol these waters, you uphold the rules and norms that are vital to the prosperity of the Filipino people, and people around the world. As the United States has long made clear: We support the 2016 ruling of the UN Arbitral Tribunal, which delivered a unanimous and final decision firmly rejecting China’s expansive South China Sea maritime claims. The tribunal’s decision is legally-binding, and must be respected,” she said.

China has refused to recognize the tribunal’s decision.

“We must stand up for principles such as respect for sovereignty and territorial integrity, unimpeded lawful commerce, the peaceful resolution of disputes, and the freedom of navigation and overflight in the South China Sea, and throughout the Indo-Pacific,” she added.

Harris urged Philippine leaders to defend such principles, especially against illicit activities and harassment experienced by Filipino fishers in the disputed waters.

“Communities like this have seen the consequences. And people here know the impact when foreign vessels enter Philippine waters and illegally deplete the fishing stock, when they harass and intimidate global fishers, when they pollute the ocean and destroy the marine ecosystem,” Harris said.

Harris reminded members of the Philippine Coast Guard that they are “in the frontlines for standing up for the international rules-based order.”

“Each and every day, as you patrol these waters, you uphold the rules and norms that are vital to the prosperity of the Filipino people and the people around the world,” she said.

Harris said the US and the world “have a profound stake” in the future of the Indo-Pacific region.

“America’s prosperity relies on the billions of dollars that flow through these waters every day. And we are proud to work with you in your mission,” the US official said.

Harris said the US is ready to stand with the Philippines “in the face of intimidation and coercion in the South China Sea.”

“We will continue to rally our allies and partners against unlawful and irresponsible behavior. When the international rules-based order is threatened somewhere, it is threatened everywhere,” she said.

The US Vice President also announced a $7.5 million worth of assistance to help the country fight illegal, unregulated and unreported illegal fishing, which she said go against internal norms and rules.

She also said the US will help the Philippines enhance its monitoring systems and upgrade its equipment.

Harris said the US will give the Philippines “a wider and more accurate picture of their territorial waters” through an initiative that uses space-based platforms to deliver a common operating picture of Indo-Pacific waterways.

It would “promote transparency. so that our allies and partners can better protect vulnerable fisheries, respond to humanitarian disasters, and detect and counter illicit activities,” she added.

In Palawan, Harris met with fishermen in a coastal village and members of the Philippine Coast Guard.

Harris’s trip to Palawan comes a day after she held talks with President Ferdinand Marcos Jr. in Manila.

She reaffirmed the United States’ “unwavering” commitment to defending the Philippines if its vessels or aircraft were attacked in the South China Sea.

Washington has a decades-old security alliance with the Philippines that includes a mutual defense treaty and a 2014 pact, known by the acronym EDCA, which allows for the US military to store defence equipment and supplies on five Philippine bases.

It also allows US troops to rotate through those military bases.

EDCA stalled under former President Rodrigo Duterte, but the United States and the Philippines have expressed support for accelerating its implementation as China becomes increasingly assertive.

As regional tensions rise, fuelled by China’s recent wargames around Taiwan, Washington is seeking to repair ties with Manila, whose cooperation would be critical in the event of a conflict.

Relations between the two countries fractured under Duterte, who favored China over his country’s former colonial master.

Marcos has sought to strike more of a balance between his superpower neighbors, insisting he will not let China trample on Manila’s maritime rights.

Harris’s visit conveyed a “stronger sense of commitment” to the Philippines’ position on maritime claims, but also underscored the need for EDCA’s continued implementation, said Jay Batongbacal, director of the University of the Philippines’s Institute for Maritime Affairs and Law of the Sea.

“The US cannot adequately carry out its obligations if it is forced to stay several thousand kilometers away in Japan or Guam,” he said.

Of all the claimants to the South China Sea, Beijing has in recent years pressed its stance most aggressively.

Hundreds of Chinese coast guard and maritime militia vessels prowl the waters, swarming reefs, harassing and attacking fishing and other boats, and interfering in oil and gas exploration as well as scientific research.

“The Philippines has the right to receive any foreign visitor. What we want to emphasize is that any bilateral exchanges should not be at the expense of the interests of any third country as well as regional peace and stability,” it said in an editorial. 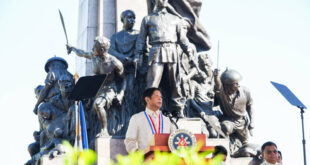 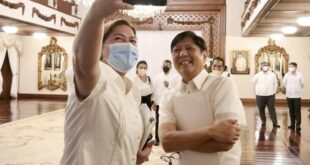 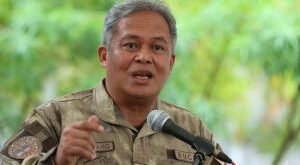 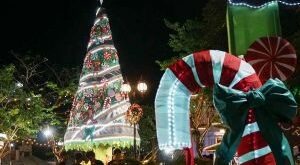 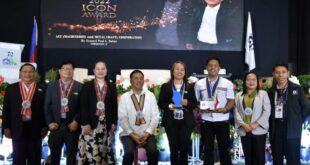 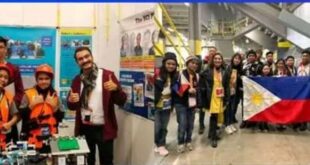