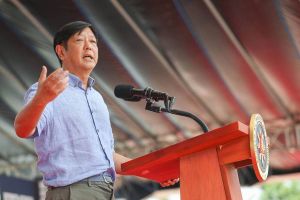 “On the implementation of the PSA between Meralco and San Miguel, it is unfortunate that this has happened. It will cause further dislocations and possible price increase for power,” the Chief Executive said in a statement, noting the TRO is against the PSA.

“We hope that the CA will reconsider this and include in their deliberations the extremely deleterious effect this will have on power prices for ordinary Filipinos,” he added.

The appellate court’s 14th Division recently handed down the TRO favoring SPPC, a subsidiary of San Miguel Corp. The TRO will be in effect within 60 days from service to the respondents.

The SPPC filed a petition hoping that the CA will grant the rate petition “without prejudice to any further requests for price adjustments for June 2022 onwards.”

Earlier, its plea for price increase was denied by the ERC since the regulatory body ruled that the agreed price in the PSA is already fixed in nature. Moreover, the grounds for increase cited by SPPC and Meralco were not among the exceptions that would allow for a price adjustment.

The ERC also aired concern on the instantaneous effect of the temporary suspension on the implementation of the PSA. It said this will consequently expose 7.5 million Meralco consumers in the National Capital Region and other areas in Central Luzon and Calabarzon to higher electricity prices without the preparation usually observed in the case of PSA termination.

It further pointed out that the fixed price PSA of Meralco with SPPC covers 670 MW of supply which, along with the other fixed price PSAs, has shielded Meralco consumers for the past several months from the volatility of prices from the Wholesale Electricity Spot Market (WESM) and automatic fuel pass-through PSAs.

If the PSAs are immediately suspended, the required proper observance of the terms of the PSA, including the contractually-agreed process of termination, will be set aside, the ERC said.