PBBM notes ‘little progress’ on Code of Conduct in SCS 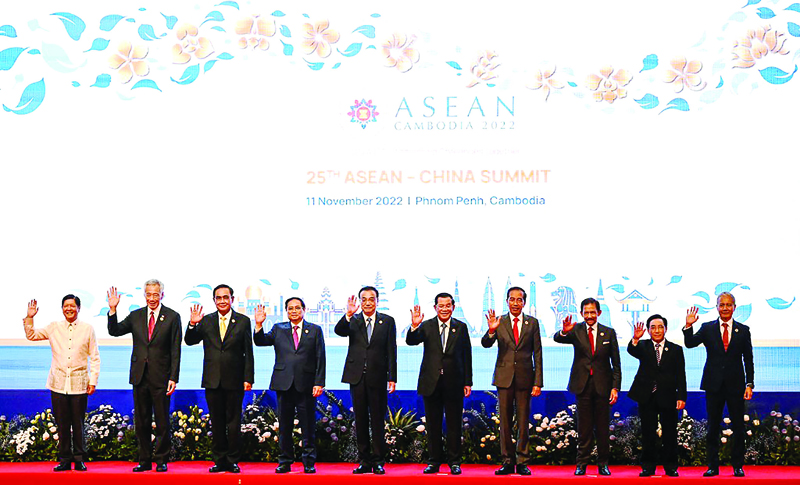 Little progress has been made on the Code of Conduct (COC) in the South China Sea, even as the need for it has become more urgent, President Ferdinand Marcos Jr. said over the weekend.

“Well, nothing new actually has happened in terms of the code of conduct. We all just restated over and over again. We need to have a code of conduct,” he said in a media briefing on the sidelines of the 40th and 41st Association of Southeast Asian Nations (ASEAN) Summits and Related Summits in Phnom Penh, Cambodia.

Mr. Marcos was among the heads of state who brought up the need for a COC at various summits.

“It is urgent. It is becoming more and more urgent…to have the actual code of conduct, already finalized and already in place as soon as possible,” he added.

Mr. Marcos said ASEAN leaders all agreed to apply the United Nations Convention on the Law of the Sea (UNCLOS) and uphold the international rule of law.

“Everybody, including the Chinese says we follow UNCLOS and international law. So at least that position of ASEAN is clear,” he said.

He said they also reached a consensus to abide by the One-China Policy, a position held by China that there is only a single sovereign state under the name China and that Taiwan is part of China.

But he said tensions between China and Taiwan must be resolved peacefully.

“We believe that Taiwan is part of China, but you must resolve those issues peacefully. That’s all ASEAN is asking for. Don’t cause trouble,” he said.

During his intervention at the 17th East Asia Summit (EAS) in Phnom Penh, Cambodia, Mr. Marcos renewed his pitch to maintain peace and stability in the highly contested sea.

“We must ensure that the South China Sea remains a sea of peace, a sea of security and stability, and of prosperity.

With the UNCLOS and international law as our basis, the South China Sea will be a nexus of vibrant economic engagements and interactions, not an epicenter of armed conflict or geopolitical maneuverings,” Mr. Marcos said.

He said contracting parties of the Treaty of Amity and Cooperation in Southeast Asia must be guided by the universal principles of “peaceful coexistence” and “friendly cooperation.”

In October 2021, tensions between China and Taiwan escalated when the former stepped up military activities near the main island.

China, the Philippines, and several other littoral states have overlapping claims in the South China Sea.

In a 2016 arbitral ruling, the Hague-based Permanent Court of Arbitration ruled that Beijing’s nine-dash line, a demarcation that covers almost 80 percent of the South China Sea, is illegal.

Meanwhile, Mr. Marcos said ASEAN leaders clashed over whether Myanmar should remain a member of the regional bloc after military leaders in that country ousted the duly elected civilian government in February last year and have since imposed a brutal crackdown on dissent.

He said the ASEAN leaders were particularly concerned over the failure of Myanmar’s military to follow a Five-Point Consensus it agreed to with ASEAN in April 2021, a peace plan that sought to call for an urgent end to violence as well as step up dialogues between the military and the opposition movement.

Mr. Marcos said while some leaders wanted to “completely kick out” Myanmar from ASEAN, others wanted to fully engage with both high and low-ranking officials.

He said the Philippines took the position of including both high and low-ranking officials in discussions.

During the 41st ASEAN Summit Retreat, Mr. Marcos called on his fellow ASEAN leaders to heed the call for the welfare and protection of the people of Myanmar.

The President sought the speedy implementation of the Five-Point Consensus plan to address the crisis in the neighboring country.

He also encouraged other ASEAN leaders to continue taking a constructive approach in engaging the stakeholders in Myanmar consistent with their shared people-centered and people-oriented vision of an ASEAN.

ASEAN earlier condemned increasingly violent actions by the Myanmar junta such as the executions of democracy activists and an airstrike that killed at least 50 people.

However, it ruled out Western-style sanctions against Myanmar or expelling the nation from the 10-member group.

The regional bloc agreed to develop a plan that would speed up the implementation of the Five-Point Consensus, saying the plan remains a “valid reference” that should be “implemented in its entirety”.

The leaders said ASEAN would also call on the United Nations and its external partners to support efforts to implement the consensus.

PBBM sees ‘poorest of poor’ to gain from fishery project

Inmates to be classified per crime to unclog jails