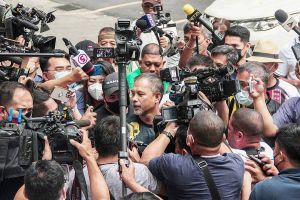 MOBBED Suspended Bureau of Corrections director-general Gerald Bantag (center) arrives at the Department of Justice to attend the preliminary investigation of the murder case filed against him and several others for the killing of Percy Lapid. PHOTO BY JOHN RYAN BALDEMOR

SUSPENDED Bureau of Corrections (BuCor) director-general (DG) Gerald Bantag attended on Monday the consolidated preliminary investigation on the murder of broadcaster Percival “Percy Lapid” Mabasa and the death of alleged middleman Cristito Villamor Palaña at the Department of Justice (DoJ).

Bantag also confirmed that he has already subscribed to his counter-affidavit before a Baguio City prosecutor, but he chose to attend the preliminary probe in person to file additional documents.

He added that he is not hiding.

“Finally, they saw that we were not hiding. Because we shouldn’t hide, there is no warrant yet. It’s not in court yet,” he said.

Bantag’s legal counsel, lawyer Rocky Thomas Balisong, meanwhile, confirmed that they filed a motion for inhibition “to remove the preliminary investigation from the DoJ.”

Their argument in filing the motion hinges on two grounds, said Balisong.

First is lack of jurisdiction.

Balisong said Bantag’s post as BuCor chief is salary grade 30 and should be under the jurisdiction of the Office of the Ombudsman.

“Under the law, all offenses committed by any public official salary grade 27 and above should fall within the Sandiganbayan therefore the preliminary investigation should fall under the jurisdiction of the Ombudsman,” he explained.

Second, Balisong noted that based on the Constitution, the Ombudsman has the power to investigate all offenses committed by public officials that appear to be illegal, unofficial and corrupt practices.

“It does not make any distinction whether the case falls under the jurisdiction of the Sandiganbayan or the regular courts,” he pointed out.

Balisong said this was interpreted in the case of Uy versus Sandiganbayan, which said that “even those offenses that do not fall under the jurisdiction of the Sandiganbayan, the Ombudsman will still take charge or take over the investigation at any stage of the proceedings from any investigating government agencies.”

He also welcomed Bantag’s attendance in the continuation of the probe.

Bantag and BuCor Deputy Security Officer Ricardo Zulueta were charged “as principals by inducement” in two murder complaints for the deaths of Mabasa and Palaña, who was identified by self-confessed gunman Joel Escorial as the alleged middleman in the broadcaster’s slay last October 3.

The first murder case in the Mabasa killing was filed last October 18.

Named respondents were Escorial, Bacoto, brothers Edmon and Israel Dimaculangan, and a person identified only as “Orly” or “Orlando.”

The complaint against Escorial and his group was consolidated with those filed against Bantag and the others.

Senior Assistant State Prosecutor Charlie Guhit, a member of the DoJ prosecuting panel, said the complainants have been given seven days “to submit comment on the motion for inhibition.”

“Upon submission of their comments, then we will resolve the motion for inhibition,” the prosecutor said.

In the meantime, Guhit said “the submission for counter-affidavit for DG Bantag will be held in abeyance.”

“So he will be submitting his counter-affidavit once we resolve the motion for inhibition, assuming that the panel would not inhibit,” he said.