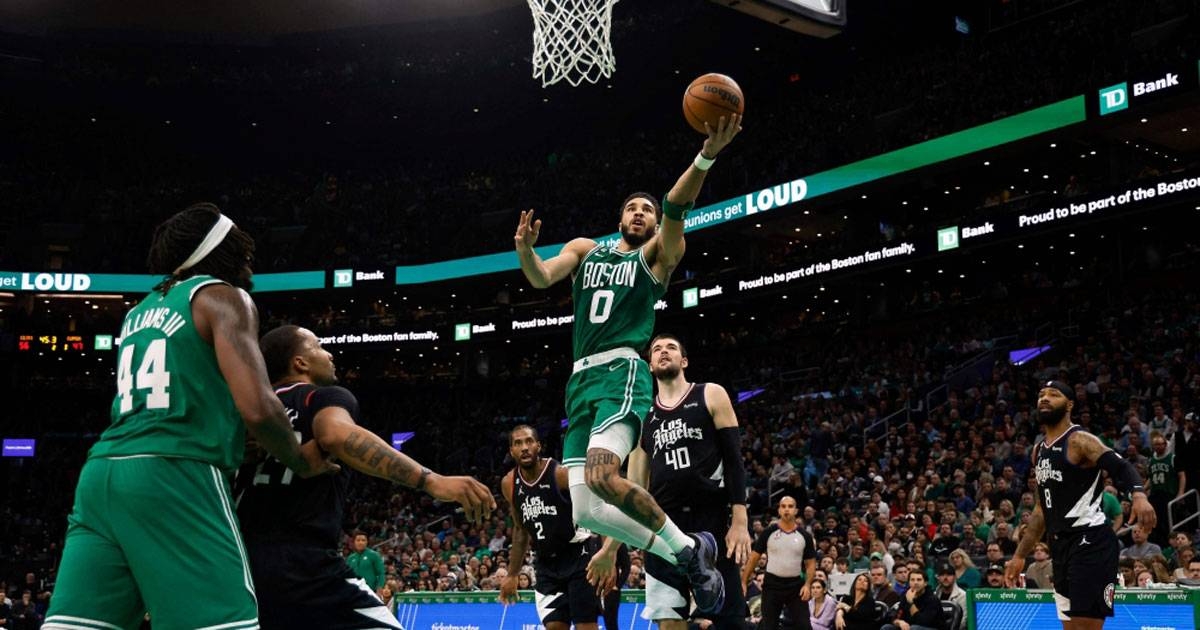 OPEN LANE Jayson Tatum of the Boston Celtics goes to the basket past Ivica Zubac (40) of the LA Clippers during the second quarter at TD Garden on Thursday, Dec. 29, 2022 (December 30 in Manila), in Boston, Massachusetts. PHOTO BY WINSLOW TOWNSON/AFP

MIAMI: Jayson Tatum and Jaylen Brown scored 29 points each as the Eastern Conference leading Boston Celtics beat the Los Angeles Clippers 116-110 in the NBA on Thursday (Friday in Manila).

The Celtics (25-10) closed out their seven game homestand, which began with three losses, with a fourth straight win.

Twice in the game, Brown pulled the Celtics clear of the 21-15 Clippers with runs of seven straight points.

With Boston just three up with 33 seconds remaining Derrick White produced a superb block to deny Paul George's layup and the Celtics kept a firm grip on the game from that point.

“It was a rough start obviously but we bounced back well and now we have got four tough games on the road and we have to find a way to get wins,” said White, reflecting on the homestand and the New Year's Day trip to the Denver Nuggets, second in the West.

Kawhi Leonard top scored for the Clippers with 26 points and eight rebounds while Paul George had 24 points.

Luka Doncic continued his extraordinary season with 35 points, 12 rebounds and 13 assists in the Dallas Mavericks' 129-114 win over the Houston Rockets.

Doncic recorded a 30-point triple-double in the first three quarters of the game — the fifth time in his career he has accomplished the feat.

There have been just seven instances of a 30-point triple-double through three quarters since the 1997-98 season, and Doncic has five of them.

Ja Morant provided a career high 17 assists as the Memphis Grizzlies beat the Toronto Raptors 119-106 with Dillon Brooks helping himself to 25 points.

The Raptors have now lost five straight home games and eight of their last 10 games despite Pascal Siakam's strong form — he now scored 25 or more in the last six games.

The Pacers beat the Cleveland Cavaliers 135-126 with Tyrese Haliburton scoring 29 points, one of four Indiana players to put up more than 20 points.

Pacers head coach Rick Carlisle was ejected in the third quarter after angrily protesting a non-call on a travel by Donovan Mitchell.

“I've been on that guys to stay off the referees and then it was the mortal sin,” said Carlisle.

“I got a lot of nice text messages during the fourth quarter from people who agreed with my assessment but that is all I will say about it,” he added.

The New York Knicks suffered a fifth straight loss with a 112-115 defeat to the San Antonio Spurs with Keldon Johnson scoring 30 points.

Julian Randle had a season high 41 points but couldn't stop the Knicks slipping to an 18-18 record with the loss to the next to bottom team in the West.