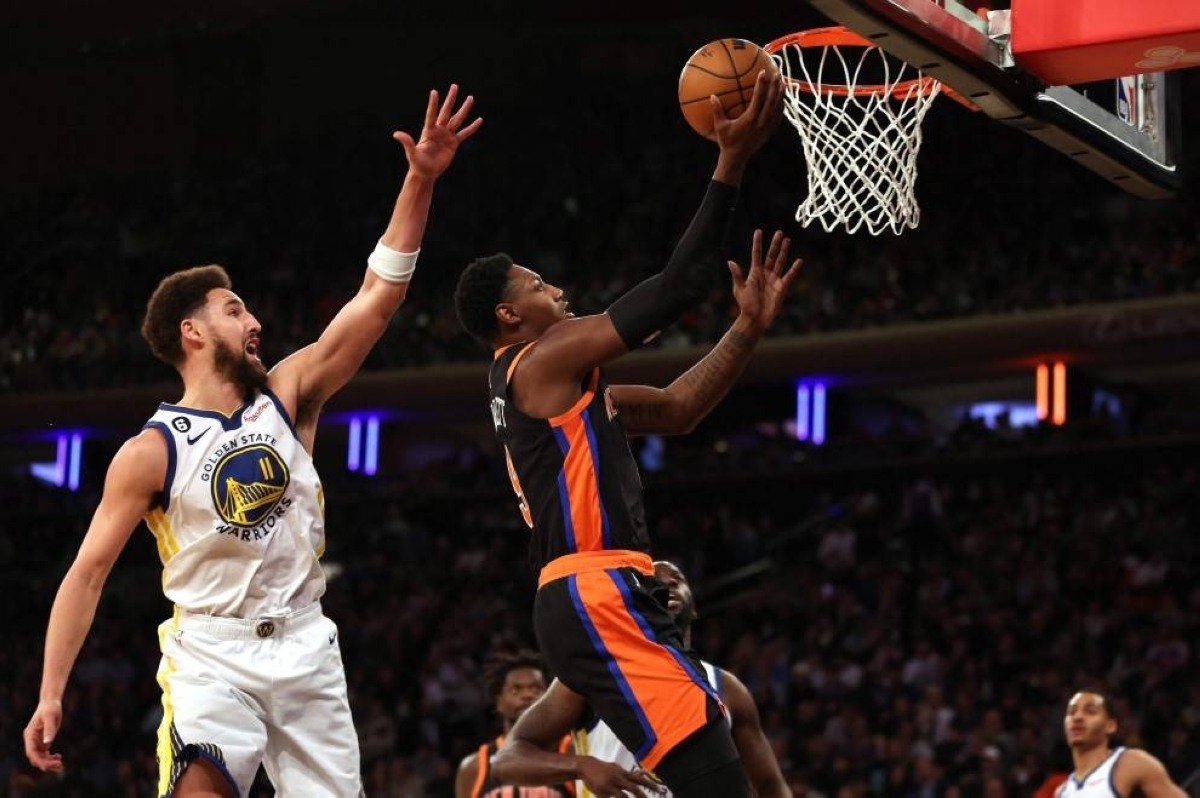 SEE YA RJ Barrett of the New York Knicks shoots a lay up against Klay Thompson of the Golden State Warriors during the third quarter of the game at Madison Square Garden on Tuesday, Dec. 20, 2022 (December 21 in Manila), in New York City. PHOTO BY SARAH STIER/AFP

NEW YORK: Immanuel Quickley scored 22 points, Jalen Brunson had 21 and the New York Knicks rolled to their eighth straight victory, beating the depleted Golden State Warriors 132-94 on Tuesday (Wednesday in Manila).Quentin Grimes added 19 points and RJ Barrett had 18 as New York extended the longest current winning streak in the National Basketball Association (NBA). Julius Randle finished with 15 points and 12 rebounds, while Mitchell Robinson had nine points and 11 rebounds.Jordan Poole scored 26 points for the Warriors, who are without Stephen Curry, Andrew Wiggins and other key players. Jonathan Kuminga had 13, while Draymond Green, Klay Thompson and Ty Jerome each had 11.The Knicks scored the first eight points of the game and never trailed. They led 33-25 at the end of the first quarter.

In Miami, Nikola Vucevic had 29 points and 12 rebounds, DeMar DeRozan scored 24 points and Chicago stopped a four-game slide by beating short-handed Miami.Zach LaVine scored 21 and Coby White added 14 for the Bulls, who used a 30-7 run in the second half to take control.Bam Adebayo made his first nine shots and scored 27 points. Adebayo also had 12 rebounds for the Heat, who got 19 points from Tyler Herro, 18 from Haywood Highsmith, 14 from Victor Oladipo and 13 from Duncan Robinson.Miami was without three starters — Jimmy Butler (gastrointestinal illness), Kyle Lowry (left knee soreness) and Caleb Martin (sprained left ankle) — and had its season-best, four-game winning streak snapped.

In Detroit, Lauri Markkanen scored 38 points, including a career-high nine 3-pointers, and Utah defeated Detroit.Jarred Vanderbilt added 18 points and 13 rebounds for the Jazz, who outscored Detroit 65-51 in the second half. Utah had at least 30 points in all four quarters.Jordan Clarkson scored 21 and Malik Beasley led the second unit with 17 points. Utah lost its previous two games by an average of 24.5 points, including a 122-99 defeat Monday in Cleveland.Jaden Ivey led Detroit with 30 points. Pistons rookie Jalen Duren had 15 points and 14 rebounds. He has at least 11 rebounds in seven straight games, matching Dwight Howard's 2005 mark for the longest streak by a teenager.

In Phoenix, Kyle Kuzma scored 29 points and the Washington Wizards stopped their 10-game losing streak.Washington played without Kristaps Porzingis, sidelined with what Wizards coach Wes Unseld Jr. called a “non-Covid illness.” But Daniel Gafford filled in at center and had 12 points and eight rebounds as the Wizards won for the first time since November 28, when they beat Minnesota 142-128 in Washington.Bradley Beal, held to two points in the first half, finished with 27 for the Wizards (12-20), including two free throws to make it a five-point lead with 14 seconds left. Deni Avdija had 16 points and 10 rebounds.Landry Shamet led the Suns with a season-high 31 points, making a career-high nine 3-pointers. Deandre Ayton had 30 points and 13 rebounds.Devin Booker missed his second straight game with groin soreness after scoring 58 points against New Orleans on Saturday.

2022-12-20
AtinitoAdmin
Share
Previous Kouame: This is best season of my life
Next Embassy joins Diplomatic Soiree of Foreign Minister