All ports of entry poised to restart testing travelers 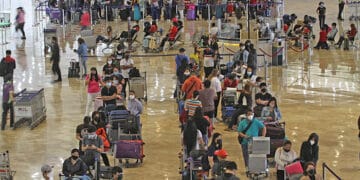 All airport and seaport terminals have been alerted for a possible reestablishment of testing requirements for arriving travelers from China and other countries tagged as “high-alert” for COVID-19.

“All bureau personnel are hereby directed to continuously intensify the quarantine protocols,” Bureau of Quarantine director Ferdinand Salcedo said in a memorandum.

Among the protocols, Salcedo said, was to “coordinate with airport and seaport terminal authorities for possible reestablishment of testing of inbound travelers from high-alert countries.”

Aside from testing, quarantine personnel were also instructed to 1) Heighten surveillance on all respiratory symptoms in all travelers and conveyances coming from China including a thorough review of the submitted Maritime Declaration of Health and health part of Aircraft General Declaration; 2) Report intercepted symptomatic passengers during arrival all…screening; 3) Submit reports of infected travelers from Points of Entry; 4) Inform travelers regarding COVID-19 infection prevention and control, and, 5) Coordinate with port and airport authorities and partners on identifying areas for display of Information, Education, and Communication (IEC) materials.

The Department of Health earlier ordered the Bureau of Quarantine to heighten surveillance of all respiratory symptoms in travelers coming from China.

Infected and symptomatic passengers should be reported during arrival, it said.

The DOH issued the statement after President Ferdinand Marcos Jr. suggested requiring travelers from China to be tested for COVID-19.

The DOH said the Inter-Agency Task Force for the Management on Emerging Infectious Diseases (IATF) has begun discussions on border control guidelines for travelers from China.

Over the weekend, the World Health Organization met Chinese officials for talks about the surge in COVID-19 cases, urging them to share real-time data so other countries can respond effectively.

The rise in infections in China has triggered concern around the globe and questions about its data reporting, with low official figures on cases and deaths despite some hospitals and morgues being overwhelmed.

The talks came after WHO chief Tedros Adhanom Ghebreyesus urged Beijing to be more forthcoming on the pandemic situation in the world’s most populous country.

The UN health agency said the meeting was “to seek further information on the situation and to offer WHO’s expertise and further support.”

It said officials from China’s National Health Commission and the National Disease Control and Prevention Administration briefed the WHO on China’s evolving strategy and actions on epidemiology, variant monitoring, vaccination, clinical care, communication and research and development.

“WHO again asked for regular sharing of specific and real-time data on the epidemiological situation – including more genetic sequencing data, data on disease impact including hospitalizations, intensive care unit admissions, and deaths,” it said.

It asked for data on vaccinations delivered and vaccination status, especially in vulnerable people and those aged over 60.

“WHO reiterated the importance of vaccination and boosters to protect against severe disease and death for people at higher risk,” the Geneva-based organization said.

“WHO called on China to strengthen viral sequencing, clinical management, and impact assessment, and expressed willingness to provide support on these areas, as well as on risk communications on vaccination to counter hesitancy.”

The UN agency said Chinese scientists were invited to engage more closely in WHO-led COVID-19 expert networks, and asked them to present detailed data at a virus evolution advisory group meeting on Tuesday.

“WHO stressed the importance of monitoring and the timely publication of data to help China and the global community to formulate accurate risk assessments and to inform effective responses,” it said.

China said this month it would end mandatory quarantine for people arriving in the country and that it had abandoned strict measures to contain the virus.

The surge in cases in China comes almost exactly three years on since the first infections were recorded in the Chinese city of Wuhan in late 2019.

Since then, more than 650 million confirmed COVID cases and over 6.6 million deaths have been reported, though the UN health agency acknowledges this will be a vast undercount.

The search for the origins of the virus remains unresolved, with Tedros insisting all hypotheses remain in the table, including the theory that the virus escaped from Wuhan’s virology laboratories.

A growing number of countries, including the United States, have imposed restrictions on all visitors from mainland China after Beijing decided to end mandatory quarantine on arrival, prompting many jubilant Chinese to make plans to travel abroad.

Passengers arriving at Spanish airports from China will be screened for COVID starting Saturday, authorities said, following an explosion of cases in China.

The measure will remain in place until at least February 15, Spain’s health ministry said in a statement, with travelers arriving from China required to undergo a temperature check and a COVID-19 test.

“A major concern lies in the possibility of new variants appearing in China that have not been controlled,” Spanish health minister Carolina Darias said.