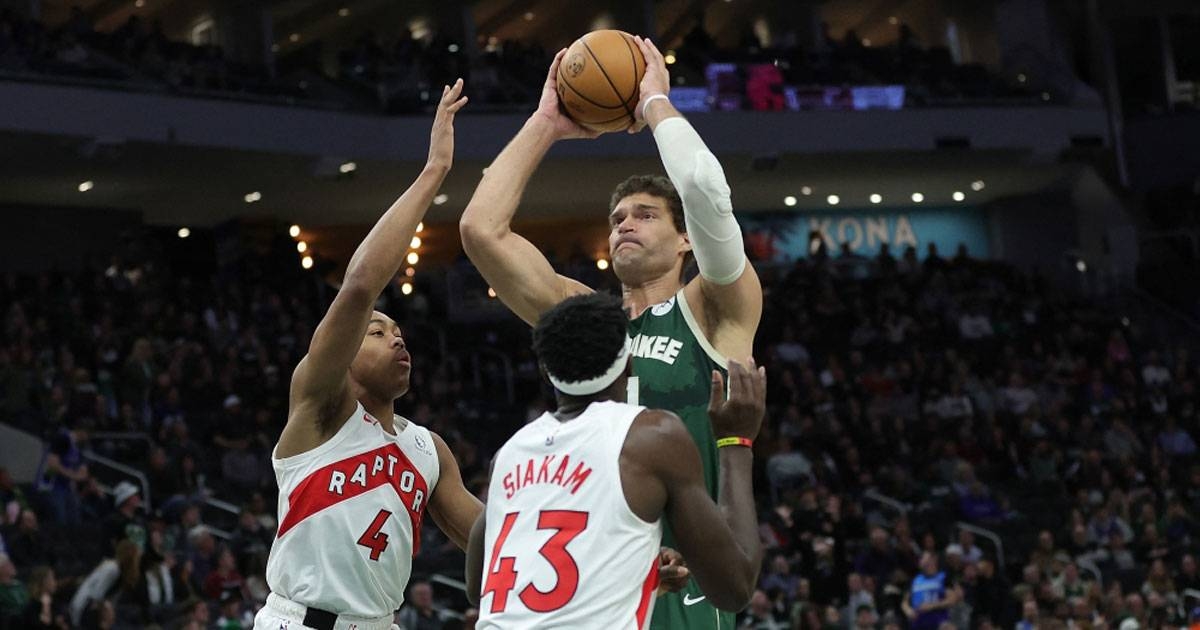 TOWERING PRESENCE Seven-foot-one Brook Lopez of the Milwaukee Bucks is defended by Scottie Barnes (4) and Pascal Siakam of the Toronto Raptors during the first half of a game at Fiserv Forum on Tuesday, Jan. 17, 2023 (January 18 in Manila), in Milwaukee, Wisconsin. PHOTO BY STACY REVERE/AFP

MILWAUKEE: Jrue Holiday scored a season-high 37 points and the Milwaukee Bucks beat the Toronto Raptors 130-122 on Tuesday (Wednesday in Manila).

The Bucks, playing without Giannis Antetokounmpo for the fourth consecutive game, shot 19 for 39 (49 percent) from 3-point range.

Play got chippy and action was halted at 6:40 of the fourth quarter with Milwaukee leading 113-110 because of an altercation involving several players near the Bucks' basket. Milwaukee's Brook Lopez was whistled for two technical fouls and ejected. Technicals were also called on Toronto's O.G. Anunoby and Jamaal Magloire in the play.

Lopez scored 15 of his 19 points in the third quarter before being ejected.

In Denver, Nikola Jokic had 36 points as part of his 13th triple-double of the season to offset a 44-point performance from Damian Lillard, and Denver won its 14th straight home game by topping Portland.

Jokic, who was 13 of 14 from the floor, finished with 12 rebounds and 10 assists. Michael Porter Jr. had 23 points and Jamal Murray added 17 for Denver.

The Nuggets were without head coach Michael Malone, who missed the game after entering the league's health and safety protocols. Acting coach David Adelman stepped in and the Western Conference-leading Nuggets didn't miss a beat.

Lillard had his 214th career game with 30 or more points as the Trail Blazers dropped their eighth straight road game.

In San Antonio, Keldon Johnson had a career-high 36 points and 11 rebounds and San Antonio snapped a five-game skid with a win over injury slowed Brooklyn.

Jeremy Sochan added 16 points for San Antonio. Johnson was 11 for 26 from the field, including two key baskets in the fourth quarter.

Brooklyn lost its third straight. The Nets have dropped every game since Kevin Durant suffered a sprained MCL in his right knee. Irving was a late scratch due to a sore right calf.

Ben Simmons had a triple-double of 10 points, 10 rebounds and 11 assists for Brooklyn in the opener of a five-game trip. T.J. Warren added 19 points and Claxton had 15 points, 11 rebounds, four blocks and four assists.