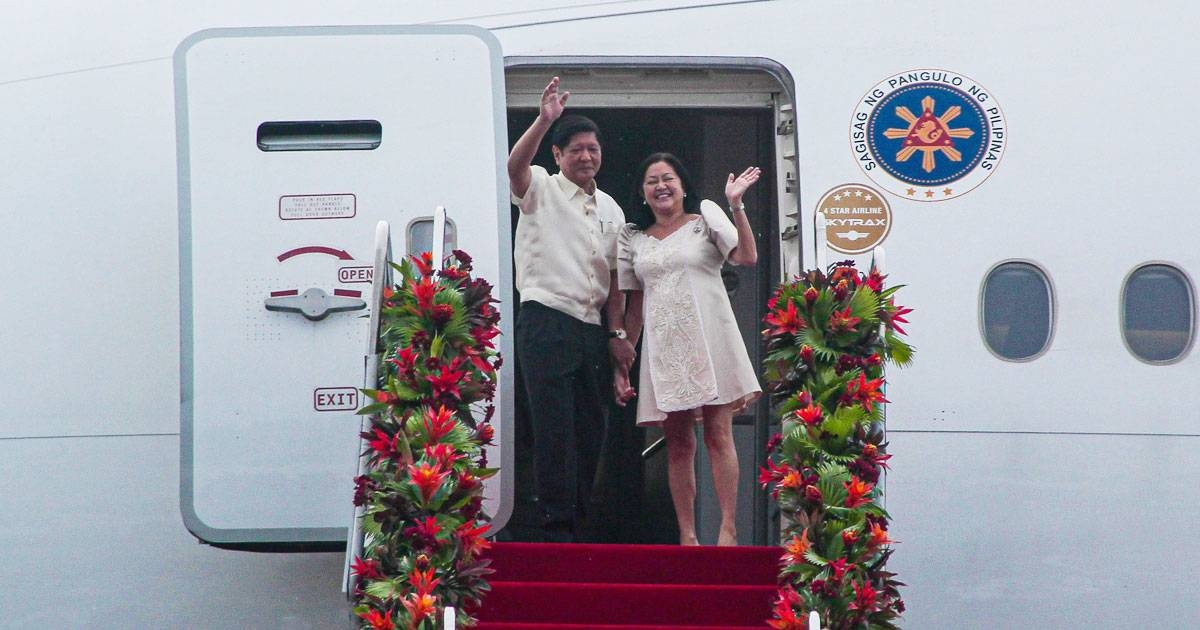 “This is the first in-person meeting of the World Economic Forum since 2020 and before the world came to a standstill because of the pandemic,” the President said in his speech during predeparture honors for him at the Villamor Air Base in Pasay City.

Accompanying the President were his wife, first lady Marie Louise “Liza” Araneta-Marcos, and some Cabinet members.

The WEF starts on January 16 and will last until January 20.

At the forum, Marcos said, he “will draw attention to our efforts at building resilient infrastructure that bolsters our effort to reinforce robust and resilient supply chains, ensures food security, including critical interlinkages with the health and nutrition sectors, while furthering climate-friendly, clean and green energy to power the Philippine economy.”

The Department of Foreign Affairs (DFA) has said that Marcos will pitch the proposed sovereign wealth fund during the forum.

The President’s trip to Switzerland is his second overseas trip this month. He made a state visit to China during the first week of January.

He is the only leader from the Association of Southeast Asian Nations (Asean) and one of the two Asian leaders to attend this year’s WEF in Davos, according to the DFA.

While in Switzerland, the President will also meet with about 700 members of the Filipino community.

He is also looking forward to bilateral meetings with other global leaders at the forum’s sidelines.

The WEF, established in 1971, serves as an international stage for public-private cooperation. It brings together leaders from government, business and civil society to address the state of the world and discuss priorities for the year ahead.

Marcos said he was invited to the Davos forum by Professor Klaus Schwab, founder and chairman emeritus of the WEF, whom he met at the sidelines of the Asean and Asia-Pacific Economic Conference meetings last November.

The President’s plan to use the forum to “soft launch” the MWF was criticized as ill-timed, since the Philippines is struggling with a P13-trillion national debt.

The President has insisted he would not give his backing to the plan if he thinks it will cause more harm than good.

He allayed fears of the fund being mismanaged and expressed confidence that Congress will install the proper safeguards.

Senate Minority Leader Aquilino “Koko” Pimentel 3rd said pitching the MWF in Davos was a “ploy to force” the Senate into passing the proposed bill to set up the sovereign wealth fund.

“It is more than a marketing strategy, it’s a move to tie the hands of Congress, particularly the Senate, on the controversial measure,” Pimentel said in a statement Sunday.

He cautioned against promoting the yet nonexistent fund at the WEF.

“It is too early, too premature. Sigurado ba silang lulusot sa Senado ‘yang (Are they sure that the) Maharlika Investment Fund bill (will be passed in the Senate)?” he said.

Pimentel is worried that “the move would only put pressure on the Senate to enact the measure swiftly” at the expense of more pressing legislation.

He said he is opposed to the measure because the fund is prone to abuse and corruption, similar to what happened in Malaysia.

He also raised concerns about the lack of transparency mechanisms, saying the management of the billions of funds will be left solely to the wealth fund’s board.

“Instead of focusing our limited resource1s on the Maharlika Investment Fund bill, let’s debate on legislation that will improve the lives of our countrymen, control inflation and create opportunities,” Pimentel said.