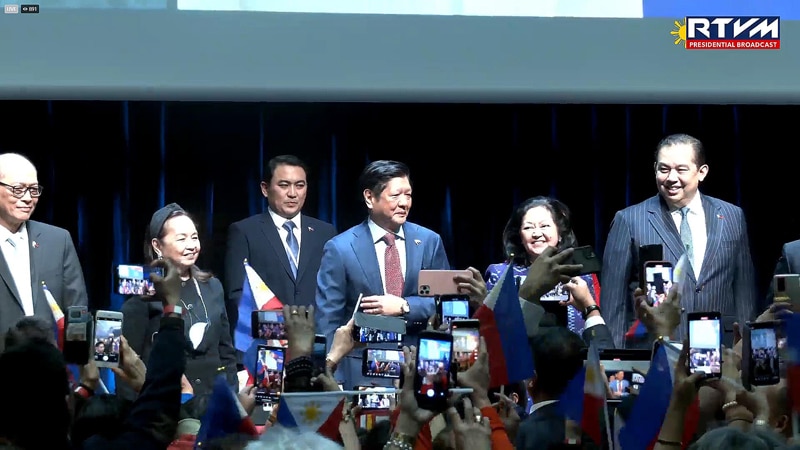 President Ferdinand Marcos Jr. on Saturday said business leaders at the World Economic Forum (WEF) considered the Philippines as part of the “VIP Club,” a list of Southeast Asian countries with the best-performing economies.

The President made this remark in an interview, saying the Philippines’ participation in the WEF in Davos, Switzerland served as an excellent platform to showcase the country’s strong economic performance.

“Because of our attendance, we’ve been now considered a part of their so-called VIP Club,” the President said, with Indonesia and Vietnam.

The President said he was able to meet with leaders at the global forum, and with several foreign investors intent on exploring business opportunities in the Philippines.

The President met with WEF founder and chairman emeritus, Klaus Schwab, whom he considers “a dear friend of the Philippines.”

The two discussed partnerships and collaboration to help the Philippines sustain equitable and inclusive growth and provide a better quality of life for Filipinos.

The Chief Executive also had the opportunity to meet and exchange views with several leaders of countries and organizations, such as World Trade Organization (WTO) Director-General Ngozi Okonjo-Iweala,

“The process that we undertook really in Davos was not simply to highlight the new situation, the new economic situation, the new policies, and the new concepts that we are promoting in the Philippines today, but also to learn from the world leaders and the world economic leaders what part the Philippines can play in this fragmented world,” Marcos said in his arrival speech.

“That was the main theme in this entire forum. [It] is how we bring back cooperation in a fragmented world. And we are seen to play a part in that and especially as a member state of ASEAN (Association of Southeast Asian Nations) and as a leading economy in Asia,” the President said.

In Davos, the President highlighted the administration’s policies, including the Philippine Development Plan, the 8-Point Socioeconomic Agenda, and various other policies and legislation that highlight the economic reforms that have led to its sustained growth.

He also reported that investments approved by the PEZA jumped 103 percent to P140.7 billion for the last quarter of 2022.

After investment pledges are sealed, PEZA arranges for the visits of investors to various locations in the country and ensures a smooth follow-through on commitments made, Guiapal said.

Trade Undersecretary Ceferino Rodolfo noted the “game-changing reforms” pursued by the Marcos administration, including the amendment to the implementing rules and regulations (IRR) of the Renewable Energy Act of 2008 to allow 100 percent foreign capital in renewable energy projects.

“And this is very important… The perennial complaint of investors in the Philippines is the high energy cost… compared with our neighbors,” Rodolfo said.

“The word is changing, and we notice that globally, there is now a greater demand for sustainability because of climate change. That’s why the use of renewable energy will become important,” he added.

Mr. Marcos returned home on Saturday afternoon, reporting the “beneficial” outcomes of his attendance to WEF in Switzerland.

During his participation in WEF, the President touted the country’s success story and encouraged foreign investors to consider doing business in the Philippines.

Several multinational companies and investment firms have expressed interest in investing in the country because of Mr. Marcos’ meetings.

“Absolutely there will be no recession for the Philippines in 2023,” Salceda said. “We will be in positive-growth territory regardless of what happens for the rest of the world. We have removed restrictions on so many key sectors – public services, the retail trade sector, the energy sector – that the country will offset global recessionary forces,” he said.

“Pent up demand will also ensure that our economy, which is at least70 percent driven by domestic demand, will have plenty of growth runway,” he added.

Salceda is the House committee on ways and means chairperson.

“We also have so many promising sectors – mining and electronics among them – that will remain resilient through the pandemic. Semiconductor demand will remain strong and above supply regardless of the global growth average. We saw that during the pandemic when everybody thought the sky would fall,” he said.

“And, if the world doesn’t go through a recession, there is definitely room to grow beyond the 6.5 percent project of our economic managers.

He said he sees inflation tapering off in 2023.

“We’re getting a better hold of agricultural smuggling issues. I’m confident that Congress’s efforts to expose how artificial onion and meat prices are will help pop the bubble,” the solon said.

Inflation should hit 4 percent by the middle of the year, and this will boost consumer demand further, Salceda said.